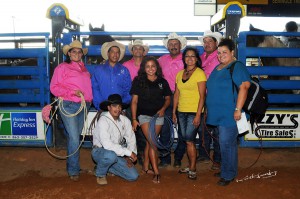 BRIGHTON — Seminole Tribal members along with members of the Confederated Tribes of the Umatilla Indian Reservation have become known as Team Phoenix on the Native Indian rodeo circuit.

Everano started her sponsorship with her brother Freddy Warbonnet to help him travel the circuit.

“I know what it’s like to go down the road and follow your dream,” Everano said. “It’s just fun to help support a positive sport.”

Other members from the team began to meet on the rodeo circuit and Team Phoenix eventually formed.

“It all started when my brother (Marvin Bowers) met Jo’s brother Cort while rodeoing out West,” said Lucy Bowers, a huge proponent of the team.

Everano then began sponsoring Marvin and her other brother Cort Herrera for rodeos and slowly other family members joined from both Tribes.

“It went to helping them out, to buying shirts with logos,” Bowers said.

The name Phoenix originated from Everano’s 12-year-old son with the same name. She also named her business after him. Everano owns Phoenix Enterprises, a Native-American-woman-owned, small, disadvantaged business that specializes in remediation services.

Bowers said that the team just happened. “We just started calling them Team Phoenix and it stuck.”

Bowers has made it her job to follow her brother and Team Phoenix and document all their rodeos and competitions.

“My brother just decided to focus on his rodeo career after he had neck surgery last year,” Bowers said. “So I told him I’d follow him and video and take pictures.”

Her plan is to put together a DVD at the end of the rodeo season to give to all the members showcasing all their hard work.

The team has become one big family. And they even reside at Bowers’ house while in Brighton.

“We call my house Team Phoenix Headquarters,” Bowers laughed. “It’s a lot of fun and I miss them all the time.”

Members of Team Phoenix are headed to the Indian National Finals Rodeo (INFR) in Las Vegas Nov. 8-12 in hopes of taking the grand title in their respective events.

“We’re all just really excited,” Bowers said about the team members making it to the finals.

She admits that rodeo is not her thing and that she lives vicariously through Team Phoenix.