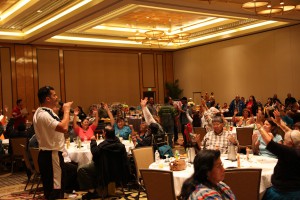 HOLLYWOOD — A relaxing day of reminiscing, holiday cheer and banter filled the Hard Rock Ballrooms for what many Tribal seniors hope will become a tradition.

At what has been dubbed the “first Senior Gathering,” dozens across all reservations including the Miccosukee elders joined together for festive music, tasty food, winning bingo numbers and a showcase of authentic Seminole/Miccosukee attire and clothing for sale on Dec. 22.

The gathering was sponsored and spearheaded by the Tribal Council and Board offices. It successfully reunited elders long parted.

“There just wasn’t enough interaction between the seniors among all the reservations, so we thought we would have one event to help bring them all together and they all loved it,” said Rep. Osceola. “They really seemed to enjoy the interaction and see each other, and it was priceless.”

Trail Reservation Liaison Norman Huggins said the idea for the Tribalwide gathering came from a similar event held in the neighboring Miccosukee area months prior.

“It was something I wanted to see with all our seniors,” Huggins said. “They did a good job. It was a good time.”

“I felt very good about it because I got to see my relatives from all over as well as friends,” she said. “A lot of us can’t get around like we used to or get in the car and just go.” She said, “It had a lot of purpose to it.”

Senior David Jumper agreed. “It’s good that they are going to have it as an on-going thing. They (the organizers) didn’t anticipate the turnout so it was even better than expected.”

Huggins said planning for the next gathering is underway. “The packed house was great because it’s only going to continue to get bigger and better,” he said.