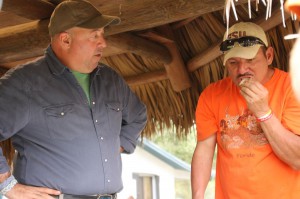 BRIGHTON — The Travel Channel’s Andrew Zimmern journeys across the globe searching for unique cultures and foods to showcase on his television show “Bizarre Foods,” and the Seminole Tribe of Florida made the cut.

From Dec. 7-8, Zimmern traveled to the Brighton Reservation to experience the traditional Seminole way of life and to sample authentic Seminole foods. The menu for his visit included swamp cabbage, turtle soup, frybread and guava sofkee.

“Watching traditional hunting, fishing, trapping, and most importantly, cooking frybread and turtle with the women was one of the most beautiful and fulfilling days of my life and something I wish all Americans could see, so I am grateful to be able to tell that story in my show,” Zimmern said in an e-mail.

Norman Bowers, Chairman James E. Billie’s special assistant, helped organize the activities for the television show, took Zimmern on an air boat ride to catch mudfish and garfish, which they slow-cooked over the grill for hours with their “guts and everything.” Despite their unappealing look, if prepared properly, he said, the fish taste great.

Bowers enlisted the help of mother, Lorene Gopher; aunt Martha Jones; sister Charlotte Gopher; and friend Diane Smith to prepare the food in a traditional cooking hut on the reservation.

“If you watch the show, this guy travels the world,” Bowers said. “For the Tribe to have the opportunity to show its traditional foods and show the world, you can’t pass on it.”

This season of “Bizarre Foods” focuses on discovering some of the strangest foods and most colorful characters in America rather than from around the world, according to the Travel Channel’s website.

The episode featuring the Seminole Tribe will air in mid-July, and word has spread quickly.