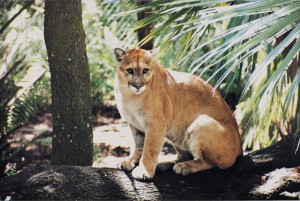 BRIGHTON — Brighton recently established a 1,000-acre panther preserve in the southwest corner of the reservation to help protect the Florida panther.

“We haven’t seen a lot of these (preserves),” said Real Estate Director Joe Martin in regard to the Tribe’s dealings with panther preserves. Big Cypress is the only other Seminole reservation with one, although they are scattered throughout Florida, said Environmental Resource Management Director Craig Tepper.

The Tribe’s Environmental Resource Management Department will monitor the project, while the Tribal Real Estate Services and Community Planning departments will oversee the administrative side.

The Brighton preserve will not only help protect the panther, but it will also help earn the reservation permits for “future development projects which may potentially impact the Florida panther,” establishing land development credits at an estimated value of up to $3 million.

“Leases would have been delayed if we didn’t do this (preserve),” Tepper said.

The preserve is comprised of land not currently used by the Tribe since the resolution states that the preserve “will not impact cattle grazing uses, cultural uses, rangeland grazing, gathering of forest products, Tribal hunting and other uses that the Tribe and its members are currently enjoying.”

“The main focus is that the habitat needs to stay as it is for their (the panthers’) use,” Tepper said. “The greatest problem is the loss of their habitat due to development.”

The resolution follows the Florida Panther Habitat Preservation Plan, which states, “Habitat preservation is critical to maintaining a self-sustaining population of panthers in South Florida.”

Because development forces panthers into smaller living spaces, it causes “increased intra-specific aggression, which is the leading cause of panther mortality,” according to the U.S. Fish & Wildlife Service.

Already this year in Brighton, a panther has been killed due to interspecies competition; and another was killed by a vehicle, which also causes a significant amount of panther deaths.

Although plenty of panthers once roamed most of the southeastern U.S., only about 100-160 adult panthers remain, all in South Florida, according to the U.S. Fish & Wildlife Service.

The Florida panther has been considered an endangered species since 1967, and there’s good reason that the U.S. government and the Tribe have fought to save the panther.