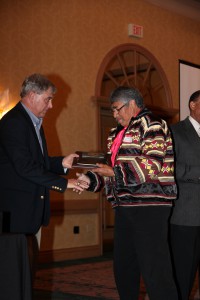 DAYTONA BEACH — Even though Tribal senior David Jumper, 65, has not ran competitively in more than 40 years, he managed to pace himself all the way into the Florida Track and Field Hall of Fame.

As a cross-country phenomenon on the high school and college level, Jumper joined five other deserving athletes for induction ceremonies as part of the 2012 Florida Athletic Coaches Association Track and Field Clinic held at the Daytona Beach Hilton Hotel on Jan. 6 with family and friends on hand for support.

In his distinguished career, Jumper competed in many events including the half-mile, mile and sprint medley (1 mile), and his bevy of awards include two cross-country state championships on the McArthur High School track team, All-American status at Haskell Indian Nations University (formerly known as Haskell University), and he had several first place finishes at county- and state-level meets. And all through one special, unorthodox ritual he followed – running barefoot!

“I wasn’t really used to wearing shoes, so it felt good to just go without,” Jumper said of the practice he gained while playing and growing up on the reservations.

The Hollywood native and son of Harry and Tommie Jumper said it all began for him in junior high while attending Driftwood, where he tried out for football but was deemed too small to play. But coaches in his physical education class noticed his talent running and doing other exercise activities. The rest is history.

At the ceremony, Jumper spoke highly of former McArthur Track and Field Coach Bill Gilmartin. Although Gilmartin could not attend the ceremony for health reasons, Jumper gave him special recognition for influencing his career and for his Hall nomination, which persevered through more than four years spent on the ballot.

“He took a little boy (me) off the reservation, helped me attend school and, even though I was shy, he put me up in his arms and just told me to go out there on the track and just run,” Jumper told attendees. “I didn’t know what that all really meant then, but I just went and did what he said. I was successful at what I was doing, so he just continued to teach me different practice methods…He helped me and made me who I am today.”

Jumper was one of the first Seminoles to win in any sport at McArthur and followed a simple philosophy on the track: “I just did what I was told to do.”

“As a Seminole Tribal member, it was very hard to compete living on a reservation because we lived in a very remote area,” Jumper said. “He (Gilmartin) knew my situation on the reservation and knew we didn’t have a lot to do as far as activities.”

Jumper said the honor is definitely one of the top accomplishments of his life. He said he appreciates the support of Tribal Council Chairman James E. Billie and family.

“I wanted him (the Chairman) there for support. He’s always been involved in sports, although he played football at the time,” Jumper said.

Jumper’s proud grandson Arek Jumper said, “I was happy for him. He has made me want to do something like this someday.”

Lifelong friends, Billie attended elementary through high school with Jumper and played in the band. Jumper also credits Billie with introducing the rhythm of music to his approach while running.

“David had a body build that makes you think of a runner, with long legs, and his upper portion reminded you of a cheetah,” Chairman Billie said. “He is an unsung hero and is very quiet, but when you give him the opportunity to show you what he can do, he is not bashful about it. So when I heard he got nominated, I wasn’t surprised but I was really glad he did because he deserved it,” Billie said. “He fit right in with his own style.”

Jumper said he is proof that hard work and dedication can be recognized beyond the reservation.

“I want people to realize that the challenge is not on the reservation but outside of it. This is where you get recognized. I want our Tribal members to know and understand this.”