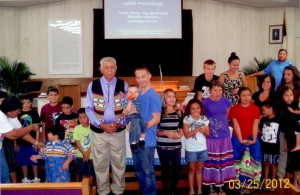 BRIGHTON — On March 25, First Indian Baptist Church of Brighton celebrated “Wonder Johns Appreciation Day.” The church was filled with people from the community and from other reservations and churches. Tribal leaders, church members and pastors, community leaders and family members expressed gratitude to the Rev. Wonder Johns, a Tribal elder, as an important influence on their lives.

Johns’ granddaughter, Alyssa Willie, sang a solo dedicated to him and showed videos and photographs taken of him from his younger days until now. The presentation was accompanied by the song Thank You for Giving to the Lord. The video will soon be available to access on the Internet.

Paul Buxton of Buxton-Seawinds Funeral Home and the Rev. Joe Bishop praised him as a man of God and expressed appreciation for his friendship of many years. An engraved plaque and certificate were given to him by the Rev. Matthew Tiger and Deacon Gary Sampson, followed by remarks from former Chairman Richard Bowers and Councilman Andrew J. Bowers Jr. He was recognized by many for his excellence in leadership and is described as a man of vision. Johns was instrumental in the early development and management of the Seminole Tribe and the Brighton community, as well as the churches.

Johns stated that it is God who gets all the glory for giving him the guidance and wisdom to serve and to accomplish what was done.

He said, “God has always had first place in my heart.” He also credited the members of the church and people of the community for their involvement and support through the years.

First Indian Baptist Church voted to bestow the title of “Pastor Emeritus” upon Johns, a title given to a former pastor of the church who is retired but still actively serves the congregation as a church member. This title is a way churches have to thank a pastor for his faithful, loving and sacrificial service while he was pastor.

Johns is a teacher of the Holy Bible and is Chairman of the Board of Trustees.

Johns and his wife, Mary, led the Brighton congregation beginning in 1996, after serving as pastor in Hollywood at First Seminole Baptist Church. He stepped down in late 2009 for health reasons, and the Rev. Matthew Tiger became pastor. Johns is 77 years old.

It was noted that when Chairman Mitchell Cypress initiated the Seminole Tribe Intercessory Prayer Gatherings, he asked Wonder to help coordinate the program, which continues today with several gatherings a year. The prayer events have proven to be a successful catalyst that has drawn together Tribal members from all different walks of faith to come together with concerns and prayer requests.

The church service was followed by a reception to honor Johns and Mary with a luncheon in the fellowship hall.