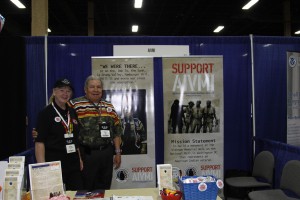 Several Tribal departments, as well as Tribal business owners, made the 2,500-mile trek to network with Indian Country and market their businesses.

In its 26th year, RES is billed as the largest and longest running Native American business conference in the nation with about 4,000 attendees this year. The summit is sponsored by the National Center for American Indian Enterprise Development (NCAIED), a nonprofit organization that assists Indian enterprises and Tribes with their economic business development.

“Seminoles are really the forerunners in many areas, and economic development happens to be one of them,” said Joel Frank Sr., a member of the NCAIED Board of Directors since 1989. “The idea of our Tribal members learning to negotiate with corporate America is strictly on another level. There’s a bright future for the Seminole Tribe.”

The conference also holds a two-day trade fair with more than 400 exhibitors, providing opportunities for American Indians to meet corporate and government buyers to market their organizations and companies, network and negotiate potential contracts.

Steve Osceola, owner of Redman Builders Inc., attended sessions about alternative energy to determine whether he can incorporate the growing trend into his own business with the Tribe. This was his second year at the conference.

“I was amazed at the amount of Tribal businesses in Indian Country,” Osceola said. “The networking was amazing.”

Osceola, a licensed general contractor, formed Chief Development Inc. in 1998 and built various projects for the Seminole Tribe, including the Dorothy Scott Osceola building and the Senior Center on the Hollywood Reservation. He formed Osceola Contracting Inc. in 2004 to provide services including concrete work, wooden decks, home additions and repairs and small buildings. He expanded to create Redman Builders Inc. almost four years ago.

With a growing construction business, Osceola looks for ways to stay competitive and continue expanding his operations. At the summit, he had a chance to meet face to face with industry leaders and learn more about current renewable energy projects. He spoke with federal agencies like the U.S. Department of the Interior’s Office of Indian Energy and Economic Development and the U.S. Department of Energy.

“I encourage anyone who aspires to start their own business or who is in business to attend RES,” Osceola said. “The resources are great, and we need to play a bigger part in RES in the years to come to show people what we can do.”

The corporation connects suppliers with businesses in need of unique products within the hospitality and gaming industries. The company has been in business since 2005 and is a source for linens, in-room convenience items, electronics, furniture, fixtures and equipment for clients like Hard Rock Hotel & Casino.

RES offered Joe and Jody the opportunity to network with other Indian businesses that might lead to additional clients. The father-daughter duo plans to continue expanding their operations through these events.

“These things are really important for people who want to do business,” Jody said. “You get to meet a lot of interesting, motivated business owners and it motivates you, too. Business is booming in Indian Country, and we want to be a part of it.”

Karla Rivera, assistant manager of Native American Travel, also attended the conference to learn about the travel and tourism industries of other Tribes across Indian Country. Rivera said she learned about potential revenue-boosting opportunities for the Tribe and plans to return next year to promote the company.

In addition, the Native Learning Center (NLC) set up a booth at the Trade Fair to promote their upcoming fourth annual Summer Conference on June 5-7 at the Seminole Hard Rock Hotel & Casino in Hollywood.

“Because we’re based in Florida, we wanted to attend to reach out to other Tribes,” Gonzalez said. “Native Learning Center is such a great resource for them and it’s free.”

Tribal member Stephen Bowers had a booth at the Trade Fair, as well, to promote the Tribe’s American Indian Veterans Memorial Initiative (AIVMI). The initiative is fighting for a memorial to be built in Washington, D.C. on the Vietnam Memorial Walk that represents an American Indian/Alaska Native/Native Hawaiian near the Three Servicemen Statue.

RES marked Bowers’ first trip west of the Mississippi to advocate for greater recognition of Native American Indians’ involvement in every branch of the military in wartime. The grandness of RES helped the initiative reach a whole new audience.

“We haven’t met anyone who doesn’t support this,” Bowers said. “We plan on seeing it through to completion no matter how long it takes.”