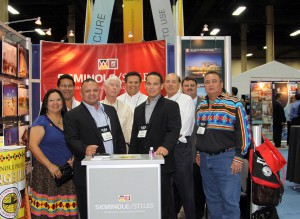 At the conference, the Board promoted their ongoing business operations, including a recent joint venture with Stiles Construction.

The Board utilized the Trade Fair to promote Seminole/Stiles Construction & Development.

Last year, the Board approved the partnership with the intention of expanding its operations in the construction industry.

With 61 years of experience in the field, Stiles offered the resources and contacts the Tribe needed to expand its business off Seminole reservations and increase its market share.

Based in Fort Lauderdale, Stiles Construction is a branch of Stiles Corp., which is recognized for developing more than 37 million square feet of projects throughout Florida, including office, industrial, retail, mixed-use and residential projects.

The company plays a major role in each part of a project from design to development to construction. Their past projects include the construction of the Dolphin Stadium’s $200-million expansion and the Trump International Hotel on Fort Lauderdale Beach.

The set-asides were created to help small and disadvantaged businesses compete in the marketplace and gain access to federal and private procurement markets, according to the U.S. Small Business Association’s website.

Instead, he said, Seminole/Stiles will utilize Tribal labor for its projects.

The joint venture was a clear choice for the Board; because the Tribe owns 51 percent of Seminole/Stiles and Stiles Construction incurs all liabilities, it can only turn a profit for the Seminole Tribe.

“This is just the beginning for the Tribe,” Lowery said. “This venture will give them a bright future for years to come.”

President Tony Sanchez Jr. said the Board used RES to lay down the foundation for Seminole/Stiles and start networking in an effort to spread the word about the venture. The next step will be following up with those connections to secure future projects.

“We’re looking to do things beyond reservation boundaries,” President Sanchez said. “I am very proud of the joint venture that we have. This administration has hit the ground running, and we’re going to keep burning the midnight oil.”

To further expand its operations outside of the gaming industry, President Sanchez said the Board will utilize the Tribe’s reputation to capitalize on other ventures as well.

“Every venture will have to be evaluated; every partnership will be looked at, but there’s nothing off limits,” President Sanchez said.

The Board has already expanded its citrus business to include shipments of its Seminole Pride Orange Juice to Santiago, Chile and hopes that will create other opportunities in Latin America. The Board has similar goals for its beef business, which currently ships to Korea, Japan and the European Union, as well as within the U.S. The Tribe has also pursued a wine partnership with Cuillo Wines, which supplies wines for Morton’s The Steakhouse and Lufthansa airlines.

A recent partnership with Mobile Mike – a local radio personality with Clear Channel Communications Inc. – is helping promote the Board’s endeavors through radio advertising, marketing and even vehicle wraps.

The ultimate goal of these partnerships, President Sanchez said, is for Seminole Tribe of Florida, Inc. to put money in Tribal members’ pockets and to help the Board operate on its own two feet.

In the midst of growth and expansion, the Board also recognizes the need to be intentional in its decisions.

Big Cypress Board Rep. Joe Frank said the current economic climate calls for more efficiency. Therefore, the Board has made every effort to streamline operations while maintaining transparency; they hold frequent community meetings to keep Tribal members informed and involved every step of the way.

After all, “that’s who we’re working for,” Rep. Frank said.

The Board hopes not only to have successful business operations but to also pave the way for future administrations, said Hollywood Board Rep. Chris Osceola.

“It’s a group effort, and we understand that,” Rep. Osceola said. “We have to work together to get things done, and I think we’ve been successful doing that. Everyone is very motivated to make things happen collectively.”

Rep. Osceola added that RES 2012 raised the Board’s awareness of Indian Country businesses and gave them the chance to see how other businesses have achieved success. He noticed a growing trend among alternative energy and said it’s something the Board may consider pursuing.

With high hopes for the future, the Board will continue to seek out new opportunities to expand its business at home and abroad.

“This administration is more open to new ideas,” Rep. Frank said. “The Board’s economic opportunities are a lot better than they have been in quite a while.”