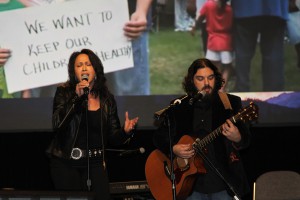 LAS VEGAS — Tribal member Paula Bowers-Sanchez made a unique impact during the Reservation Economic Summit this year through a special music performance.

“This year, it was my privilege and honor to perform at the Celebrating Women in Business Luncheon and Fashion Show,” Sanchez said.

“As a businesswoman myself, I felt especially connected to the audience,” she said. “It was especially meaningful because proceeds from the show benefitted the effort to raise cancer awareness in Indian Country.”

The luncheon raised funds for the American Indian Cancer Foundation, a nonprofit organization that strives to reduce cancer and its impact on American Indian families through education, improved access to prevention, early detection, treatment and survivor support. They help raise awareness to the fact that American Indians and Alaska Natives face alarming inequities in cancer incidence and mortality.

“Sadly, many of us have faced cancer, or have relatives or friends with this disease,” Sanchez said. “We struggle with the fight against cancer because cultural beliefs, misinformation, lack of access to health care and/or fear keep us from gaining the knowledge necessary to detect and cure cancer. We all have a responsibility to take part in causes such as this. I am thankful that I was able to be part of such a worthy cause.”

Sanchez said she hopes to have similar opportunities in the future and said RES offered her many opportunities.

“I want to thank the National Center for American Indian Enterprise Development for the opportunity to take part in this year’s Reservation Economic Summit.

“This annual gathering of Tribal businesses, Indian entrepreneurs and those who do business in Indian Country is essential and its sponsors deserve congratulations for a job well done.

“RES2012 provided a platform not only for business development but to discuss multiple issues we face in Indian Country,” she said.