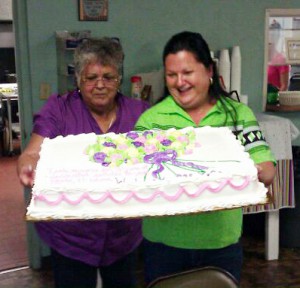 BRIGHTON — After 35 years of dedicated work with the Seminole Tribe, Brighton’s Director of Elder Services Leah Minnick retired on Feb. 24.

Family, friends and community members came together to honor and congratulate Minnick during a retirement party held at the Senior Center on March 1.

“I didn’t want nothing,” Minnick said. “I told them I just want to walk out that door quietly.”

However, her staff and her elders were not going to let that happen.

Minnick began working for the Seminole Tribe and the department, called Hot Meals at the time, on Nov. 17, 1976.

“I had been working outside in Okeechobee, raising my kids there, and somebody told me there was a job open if I wanted to come work for the Tribe,” she said. “It was with the clinic. So I applied for it.”

She traveled all the way to Hollywood to interview for the position. Although she didn’t land the position she originally wanted, as she was leaving her interview, then director of Hot Meals Lottie Herald chased her down and offered her a job on the spot as an assistant cook for Hot Meals.

“She came running after me when I was fixing to leave and said, ‘Leah, I was hoping they wouldn’t give you the job because I got a job for you at the Hot Meals and, if you want it, you can start right away.’ I said OK, and I’ve been there ever since,” Minnick said.

After four years of promotions within the department, Minnick became the director.

She said at that time, Hot Meals mainly fed the elders. During her 35 years, she slowly added programs and events to the department.

As director, Minnick organized trips, bowling and horseshoe tournaments, holiday parties and anything else that added fun and adventure to the Department of Elder Services.

Minnick loved making it possible for the elders to experience things off the reservation and to see things they didn’t know existed. Minnick said their trip to Alaska stands out above the others.

“That was the best trip ever,” she said. “Happy Jones went on that trip to Alaska and just couldn’t get over some of the things she saw.”

Time quickly passed, and, before Minnick knew it, she had spent her entire career at the Department of Elder Services.

“It got to the point where my oldest daughter said, ‘Mom, when are you going to retire? I don’t want to come in there when you’re still the director,’” Minnick laughed. “She turns 55 in August, so I got out just in time.”

Minnick said she’s going to miss her staff and planning activities, but she’s looking forward to just being a senior. Thanks to Minnick’s hard work and persistence in getting the new Senior Center in Brighton, she will get to fully enjoy it.

She admitted that she’s still adjusting to retirement, but she has plenty to keep her busy, including straightening up her house and taking care of her cows.

Minnick also plans to take up sewing. Her mother was a seamstress and said she never learned to sew because she was busy working and raising her kids. Now that she will have the time, she would like to finally learn.

While Minnick never thought she would spend her entire career in one place, she said things happen for a reason and that she must have been meant for the Senior Center.

She only has one regret.

“I should have kept a journal because I could have wrote a book…it would have been funny,” Minnick laughed. “I had a lot of fun.”