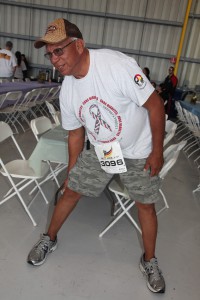 BIG CYPRESS — “Everybody is a winner!”

It’s a phrase that Seminole Health Director Connie Whidden likes to use when it comes to all Rez Rally participants.

Whidden, like many other Rez Rally participants, spent months preparing for the Tribe’s biggest race of the year and getting into shape. The 12th annual event was held on Jan. 21 in Big Cypress, and Whidden competed in the walk category.

“I’ve been walking just about every morning for the past two years,” Whidden said. “After last year’s Rez Rally in Immokalee, my sister (Brighton Tribal senior Patty Waldron) and I started working out with the fitness trainers two days a week. On Mondays, Wednesdays and Fridays, we’ll walk 2 miles; and on Tuesdays and Thursdays, we have been working on our upper bodies and our legs with the Fitness Department.”

Hollywood Tribal senior Wanda Bowers said she spent most of her days working out at the Hollywood Senior Center to prepare for the big race.

“I don’t know about everybody else, but I’ve gotten on the stationary bicycle and treadmill for at least a month,” Bowers said. “It doesn’t take me long to get into good shape.”

“I walk a lot,” said Tommie, who regularly rides his horse on Fort Pierce’s Chupco Ranch. “I work out at least once every week. I watch what I eat every day, and I try to keep myself in shape.”

“We’ve had a trainer that comes out to us three times a week for an hour,” Guzman said. “We have been doing cardio exercises and we’ve been working on leg stretches. We’ve been working on our breathing techniques as well. The workouts have helped us get ready for the Rez Rally.”

Meanwhile, Trail Liaison Norman Huggins opened up on how he kept himself in shape for the Rez Rally.
“I didn’t really have to try too hard to get ready because I work out every day,” Huggins said. “I play a lot of basketball, and I walk 3 miles at the Trail Reservation every day. I try to eat a lot of salad, chicken and fish to keep myself healthy. It makes me feel good about myself and for this Rez Rally.”

Immokalee Tribal citizen Christopher Briscall said he used his regular play of pickup basketball and flag football with his siblings as a way to prepare for the Rez Rally.

“I want to stay in shape and be healthy,” Briscall said. “I make sure I eat a lot of fruits and vegetables like apples, bananas, carrots and broccoli.”

The amount of time spent preparing for Rez Rally not only helped participants complete the 3.1-mile race but also helped them establish regular healthy exercise regiments, making everybody a winner.