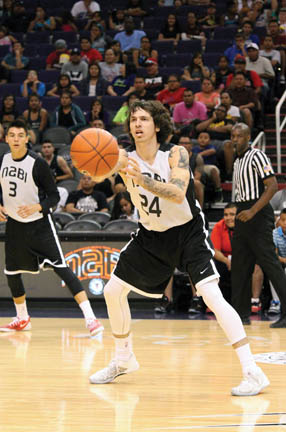 PHOENIX — The tallest player on the Rez Runners made a big impression at the Native American Basketball Invitational (NABI).

After scoring 22 points in the championship game, Trewston Pierce was named the tournament’s most valuable player July 5 in Phoenix, Ariz. The 6-foot-5 forward/center from Hollywood received the award at midcourt in the US Airways Center following the Rez Runners’ 66-51 win against Cheyenne Arapaho.

Pierce said getting acclimated to shooting in a big arena was “no problem,” but sprinting up and down the NBA court – 10 feet longer than high school courts – took some adjustment.

“It’s harder to run on it because it’s longer,” he said.

Considering the tournament drew 64 teams, Pierce’s selection as MVP came from a field in the neighborhood of 700 players.

Pierce said the award means a lot to him because he practices and works out about four hours every day at the Hollywood Reservation Gym.

“I put in hours daily for that. It paid off,” he said.

Pierce played for American Heritage School in Plantation as a junior last season. He said he plans to play for Fort Lauderdale High in his senior year.