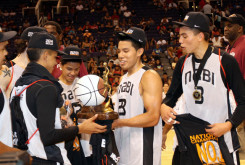 PHOENIX — Seminole basketball players had a memorable trip to the Valley of the Sun earlier this month.

J.U.S. Nation, whose intertribal roster includes a half-dozen Seminoles from Florida, won the Native American Basketball Invitational (NABI) in Phoenix, Ariz. July 5 while using the name Rez Runners. The Rez Runners blazed an undefeated path through the desert by winning all eight of their games, including the championship tilt in the 18,000-seat US Airways Center, home of the NBA’s Phoenix Suns.

“They run it like an NBA game with announcers, dancers, a mascot. The kids got the full experience,” said Rez Runners coach Andrew Jordan Bowers.

Described by organizers as the nation’s largest Native American basketball tournament, NABI featured high school players (including 2014 graduates) who comprised 64 teams in the boys division and 64 in the girls division. As the only squad from east of the Mississippi River, the Rez Runners had the farthest to travel. The trip turned out to be worth every mile as they notched their first NABI title with wins against squads from Arizona, Montana, Nebraska, New Mexico, Oklahoma and South Dakota.

“It’s a big tournament. Our goal has been to win it for the past six years,” said Bowers, whose team played games in Phoenix and neighboring Scottsdale.

The Rez Runners were determined to go further than last year when they were ousted in the quarterfinals. That’s one reason the team celebrated its championship victory as if it had captured the Final Four.

“It was a huge celebration; everyone jumping on everyone. Just like the NCAA championship, there were hats and T-shirts and a trophy,” Bowers said.

Seminoles on the Rez Runners are Trey Boone, Josh Boromei, Christopher Briscall, Dennis Gonzales, Hunter Osceola and Trewston Pierce. They teamed up with Tristin Fierro and Mathew Wingett from the Winnebago Tribe of Nebraska, Draven Hickman from Mississippi Band of Choctaw Indians and Ryland Moore from Otoe-Missouria Tribe of Oklahoma.

The journey to the final started when the Rez Runners finished first in their four-team pool with a 3-0 record. Two more victories pushed the team into the quarterfinals, where they edged the AZ Warriors from Arizona, 61-58.

The semifinal proved to be the toughest and most dramatic game for the Rez Runners, whose third win of the day July 4 was a double-overtime thriller, 78-73, against Many Feathers from South Dakota.

“That was one of the craziest games I’ve ever played. Every shot they put up was falling,” Pierce said.

Many Feathers sank a 3-pointer in the waning seconds of regulation to force overtime. In the second overtime, the Rez Runners trailed by four with about 50 seconds left, but the deficit was erased thanks to sharp shooting from Osceola, the team’s top guard who signed with Barry University earlier this year and won a state title with American Heritage School.

Osceola scored 27 points in regulation and all but two of his team’s points in the overtimes, including a pair of crucial baskets from beyond the arc.

“Hunter brought us back with two 3-pointers,” Bowers said.

Despite playing three games plus two overtimes in one day, the Rez Runners still had plenty of energy left for the championship game the following afternoon. The Rez Runners made sure overtime wasn’t required, as they surged past Oklahoma’s Cheyenne Arapaho, 66-51.

The teams were knotted 31-31 at halftime.

When Cheyenne Arapaho took a three-point lead with about 10 minutes left, Bowers decided that his defense needed a pep talk.

“We were playing good defense for 20 or 25 seconds, but then in the last second we’d give up an offensive rebound or something,” Bowers said.

Bowers called a timeout and urged his defense to step up. The players responded to their coach’s words.

“Finally, we locked in and got a complete stop,” Bowers said.

The complete stops on defense kept coming one after another as the Rez Runners scored 14 unanswered points to seize control of the championship.

“We went on a run that gave us a cushion,” Bowers said.

Pierce led the Rez Runners with a game-high 22 points and was named the tournament’s most valuable player.

The championship victory included an additional perk because it came against a familiar foe.

“We always end up playing [Cheyenne Arapaho] in quarterfinals, semifinals or finals. It’s kind of even sweeter to beat them,” Bowers said.

After the victory, the Rez Runners visited slam dunk legend Kenny Dobbs at his home in Phoenix. Last year, the Choctaw Nation member entertained youngsters during a performance at the Brighton Reservation Gym.

“But this is the biggest,” Bowers said.

Road to the title 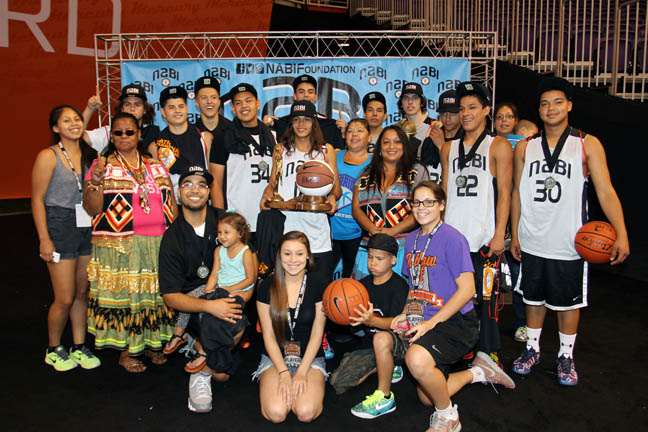