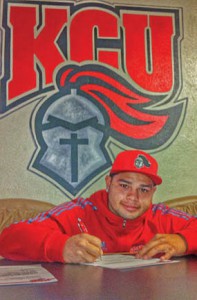 GRAYSON, Ky. — Cardinal Gibbons High School running back Trevor Osceola recently signed to play football at Kentucky Christian University (KCU) in the fall. With an average of 5.75 yards per carry this season, Osceola proved his value to the team and to the KCU recruiter.

“We built a great connection,” said Osceola, 18, who met with KCU coaches and players Feb. 6 during a visit to the school in eastern Kentucky. “When I saw the campus and met the players, it was like a home away from home.”

The small size of the university – about 600 students – appealed to Osceola. He believes it will make his transition to college life easier.

“Trevor brings a very high amount of character to our team,” said coach James Gibson, recruiting coordinator. “He’s an outstanding kid and did everything he was supposed to do in high school. He has his priorities right – he’s a student first and an athlete second.”

Gibson believes Osceola is an important recruit for the team and has high expectations for him as both a player and a leader.

“He’s a powerful running back,” Gibson said. “He’s going to make it hard for people to tackle him.”

In addition to his work on the field, Osceola plans to study business or sports management. He reports to football camp in August and knows he has his work cut out for him.

“The coaches like the way I play and I may have the opportunity to start,” he said. “The coach wants me to make a difference any way I can.”

Osceola looks forward to the football season, meeting new people and experiencing life away from family and friends. He said he’ll have butterflies in his stomach when he steps onto the field for the first time Aug. 30, but he welcomes it.

“I was always told hard work pays off, so I know I’ll always work harder than the people in front of me and behind me,” Osceola said.