Skip to content
You are here
Home > Community > George Billie, the forshee of Ah-Tah-Thi-Ki 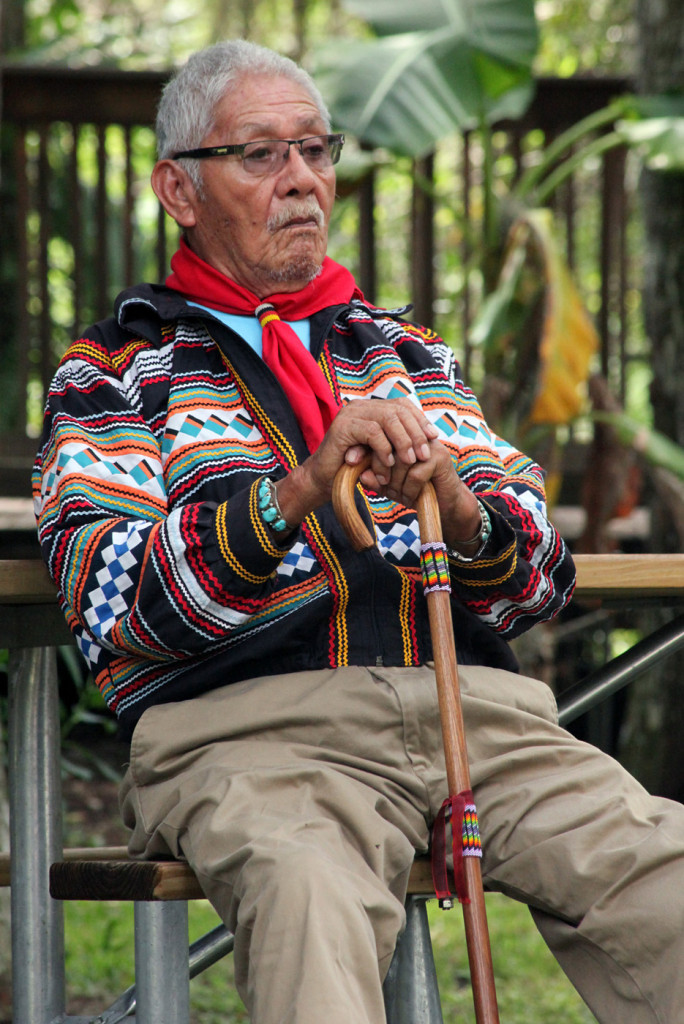 From his days as an alligator wrestler to his years as an Ah-Tah-Thi-Ki Museum cultural ambassador, Billie has shared and spread his vast wealth of wisdom generated during his 87 years.

“He lived a lifetime of teaching his language and culture,” said his daughter Diane Buster. “He’s old school; he looks at himself as a poor person with a lot of knowledge, but that knowledge makes him who he is.”

Billie has been an important part of Ah-Tah-Thi-Ki since it opened in 1997. He maintained the village and interacted with tourists every day. In fact, he spent a great deal of his life entertaining and educating visitors while tangling with alligators in Miami and Fort Lauderdale, until he gave it up about three decades ago.

“I put on shows for 300 people at a time,” said Billie, of the Panther Clan. “I showed tourists alligator smiles.”

Billie also worked in the fields of Immokalee and the field of show business, having appeared in movies including “Wind Across the Everglades” in 1958, and television shows such as “Gator Boys” in 2013. He said some people call him a movie star.

Since he retired from Ah-Tah-Thi-Ki at the end of May, Billie has welcomed visitors into his Big Cypress home to reminisce about a life that began in 1927 when he was born in a chickee off U.S. Highway 41 in Collier County.

Billie recalled stories his grandparents told him about Seminole history. A tale from his grandfather came from the Seminole Wars when Seminoles hid in the Everglades “like the birds” and used flamingo calls to signal each other during battle.

“Some white people hated Seminole people, but I figured they just didn’t understand each other,” Billie said. “My grandma told me they just wanted the land.”

As a young boy, Billie wanted to attend school but said the teachers didn’t want Seminoles in their classrooms. So he learned English through comic books by looking at the pictures and figuring out the meaning of the words. He reluctantly accepts that Tribal kids learn English now.

“They don’t speak my language in Hollywood so much anymore,” he said. “They see me, we have the same color skin, but we can’t talk. I’m sorry that happened. They go to school and learn English; that’s why they don’t talk my language.”

Billie lived in Miami and Hollywood beginning in 1942 but had never walked through the front door of an establishment until 1963. He went into a bar in Hollywood.

“(President) Kennedy made that happen,” he recalled. “They said, ‘Sit down by me, chief.’ Kennedy was a good man. He said we can do anything we want, so that’s what I did. He opened the door for me.”

A Big Cypress resident since 1975, Billie signed on to work for the Museum before it was even built. Ah-Tah-Thi-Ki means “a place to learn” and Billie always shared his knowledge with visitors during his 17 years on the job. Paul Backhouse, director of the Ah-Tah-Thi-Ki Museum and Tribal Historic Preservation Officer, said Billie looked after the village every day, rain or shine, weekday or weekend.

“He was an incredibly important part of what the Museum is and what the Seminoles are,” Backhouse said. “He made sure every visitor met a Seminole and made it the most authentic experience for them.”

“He delighted in teaching the language,” added Ellen Batchelor, head of Museum security. “He taught me a lot about patience, tolerance, pride and respect.”

“Even Tribal people see him as an uncle or grandfather. There are few people in the world that can transcend cultures; he’s very good at relating to people,” Backhouse said. “We owe it to his legacy to preserve the village going forward so visitors will always be able to see its authenticity.”

Cancer has slowed Billie in the twilight of his life. Instead of tending to the village he loved at Ah-Tah-Thi-Ki, he spends time on the wide porch at his home listening to the radio and talking with friends.

“He’s proud of the things he’s done,” Buster said. “He gave a lot to the village but he knew his limits. He stopped when it became too much for him.”

“God made Seminoles a long time ago,” he said. “God looks down at us all the time, every day. God is on my side. White people tried to kill us but didn’t get us all. God is still watching today and wants people to know God is on their side.”

Billie had eight children, three of whom are still living. Nephews, nieces, grandchildren and great-grandchildren are too numerous to count.

“My father represents a period we will never see again,” Buster said. “He’s seen a lot of changes and always provided for his family.”

Backhouse believes some of the greatest men in history are the ones who are understated and believe in their culture.

“He’s a gentleman and has represented his culture steadfastly,” Backhouse said. “He’s been an amazing ambassador for the Seminole Tribe of Florida; you can’t get a higher accolade than that. George Billie is one of those old-school gentlemen that the world doesn’t make anymore.”