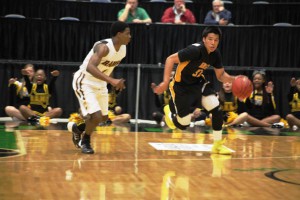 LAKELAND — This time they weren’t going to lose.

“No way,” said American Heritage starting point guard Hunter Osceola, referring to the Florida High School Activities Association (FHSAA) Class 5A state basketball championship that had eluded the Patriots two years in a row. “Not again. It could never happen. No way.”

And he was right.

The third year was a charm for Heritage (Plantation). After they reached the boys prep Final Four the past two years only to fall in the semifinals in 2012 and the final last year, the Patriots finally ascended to the top of the class as they overwhelmed the Lakewood High Spartans (St. Petersburg), 98-70, to claim their first state title before a packed Lakeland Center gym March 1.

Heritage nearly hit the century mark on the scoreboard as it set a state record for most points scored by a team in a state championship game since the FHSAA began keeping records in the 1950s.

“Like I’ve always told this team, when you’re running out the way we did, man it is showtime. Showtime Heritage,” Stephenson said.

Heritage’s nine senior leaders helped build a comfortable lead that guarded against any collapse. Osceola, the senior playmaker who has signed a letter of intent to play for Barry University in Miami Shores next season, played a key role in the victory. Beyond his eight points, two assists and two steals, he was the virtual quarterback for his team.

“When you first watch Hunter, you may not see how he impacts the game. But the more you watch him, the more you see how savvy and mature he is and how he does a lot of the little things,” wrote Josh Darrow, of SouthFloridaHighSchoolSports.com. “(Hunter) rarely turns the ball over. He gets (his team) into their sets easily and gets the ball where it needs to be.”

The Patriots led 28-17 after the first eight minutes and 54-31 at halftime. The pace of the game was so fast up and down the court that one official had to leave the game due to dehydration as he had difficulty catching his breath.

The third quarter ended with the Patriots up by 29 points. At the final buzzer, the Patriots swarmed the court in a madcap celebration that moved into the stands.

The victory was the fifth state championship in sports for Heritage in the 2013-14 academic year. The other titles belong to girls’ soccer, girls’ golf, boys’ swimming and football.

The Patriot roundballers finished 25-7, ranked No. 1 among 5A teams and 111th among all teams nationally with only four Florida teams ahead of them: Montverde Academy, Weston Sagemont, Orlando Lake Highland Prep and Miami Norland.

Osceola spent his sophomore year at Hollywood Christian High School and his junior season at Northeast High in Oakland Park. As of March 20, he was the 104th-rated guard in the country and 49th-ranked player in Florida by ESPN Recruiting Nation.

In addition to Barry, Osceola was also recruited by University of North Florida, Florida Gulf Coast University and Murray State.

“We are very happy that Hunter Osceola will be coming to Barry U,” said Barry basketball coach Butch Estes. “This league is full of good players and especially guards. He will give us depth at this critical position. Hunter is very versatile and has the benefits of being well-coached at a young age and coming from a winning program.”