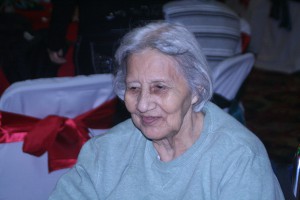 IMMOKALEE — The passage of time may have taken its physical toll on Louise Motlow, but she cherishes vivid memories that span more than three-quarters of a century. She was born sometime prior to 1932 in a region often referred to as “Florida’s last frontier,” while her family worked in a Miami tourist village.

Her parents, Jack and Lena Billie Motlow, followed the trend of the Seminole lifestyle during the first half of the 20th century in South Florida. This included dividing their time between campsites in the Everglades and the tourist villages in Miami for the sake of economy. Seasonal tourism provided a market for their arts and crafts during the winter months; the remainder of the year was spent in the family’s Panther Camp near Ochopee.

Working beside her mother, Louise helped tend the garden and learned to prepare the meals, sew, bead and make baskets in the tradition of her ancestors. Her father was an avid hunter who provided meat for their meals and traded alligator, otter, deer and raccoon hides for necessary supplies.

Louise never dreamed that Immokalee would become her permanent home. Her first recollection of Immokalee centered upon Roberts General Store. This trading post was the hub of the small frontier community and a favorite gathering place for Seminoles and local farmers and ranchers. Jack Motlow brought his family here every few months while trading hides.

When Louise turned 14, she became old enough to join her family in the tomato fields near Ochopee. Up before daylight, the farm workers would ride in Cory Osceola’s old truck to a back-breaking job in the fields and then regroup for the long ride home at the end of the day.

Within a short time, the Motlows became one of the founding families of the Immokalee encampment on the curve of Route 29. The farming community was growing, and they needed to live close to the jobs in the fields during the growing season and schools for their children. In the off months, they migrated to the Dania Reservation in Hollywood to supplement their income.

“Seventeen was one of the most important years in my life,” Louise said. “I became the wife of John Osceola and gave birth to our first child, Grace. While visiting Hollywood, I attended Rev. Crenshaw’s 1st Baptist Church and became a Christian. A short time later, I was baptized by missionary Sam Tommie. God has been an important part of my life ever since.”

“I was living on the curve when my first three children were born, and then we moved down to Hollywood,” Louise said. “After a while, John and I separated, and I returned home to Immokalee as a single mother with a large family to support. I found work in the fields, did sewing and beadwork and took odd jobs whenever possible. For a while, I worked in Hollywood on an assembly line making electrical parts for telephones.”

Forced to follow work availability, Louise fluctuated between Hollywood and Immokalee for several years, but she always returned to her family camp whenever possible. When her youngest daughter, Gale, was in the fifth grade, she was determined to make Immokalee their permanent home.

The first piece of land on Stockade Road that would eventually become the Immokalee Reservation had been acquired, and Louise joined her parents and sisters with their families in creating the growing Seminole community. She joined the staff of the Arts & Crafts Department founded by the Florida Governor’s Council, and she supported her family by creating Seminole designs, baskets, dolls and beadwork.

Four of her children graduated from Immokalee High School and two have sought higher educational opportunities. Grace was the first Immokalee Harvest Festival Queen; Gale attended Haskell University and is the site manager of the Immokalee Senior Center; Norita has worked in education, served as the Immokalee Board Representative and is head of the Immokalee Building and Grounds Department; Benny was an Immokalee Council liaison and is a local businessman.

Three of her eight children have passed on, and the remaining five with their children are a close-knit family. At present, she has more than 20 grandchildren and nine great-grandchildren.

“My mother has led a very full life, but it hasn’t always been easy,” Gale Motlow Boone said. “Her children and God have always been her first priority.”

“She made many sacrifices on our behalf, and I can never repay her for all the love and compassion that she has given us,” Boone said. “No matter how tired she was, she always saw to it that we had clean clothes and food on the table. She would make the impossible happen. Knowing how much it meant to me to be like the other kids in school, she somehow performed a miracle and surprised me with a pair of designer jeans.”

“I know that God has taken care of me, and I talk to him each day,” said Louise. “God began to make a difference from the first day that He entered my life. I have watched Him be a part of our community as it has grown. Years ago, the missionaries used to come to visit our camp, and then we held church in the chickee behind Lucy John’s house and the gym. We prayed for a church and finally, last year our prayers were answered, and we opened the doors of our house of God.”

“Now I pray that our young people will come to the church, talk to God and ask for guidance,” Motlow said. “With God’s help, all things are possible. We come from strong people who have survived much hardship. With God’s help, we will carry on our heritage.”