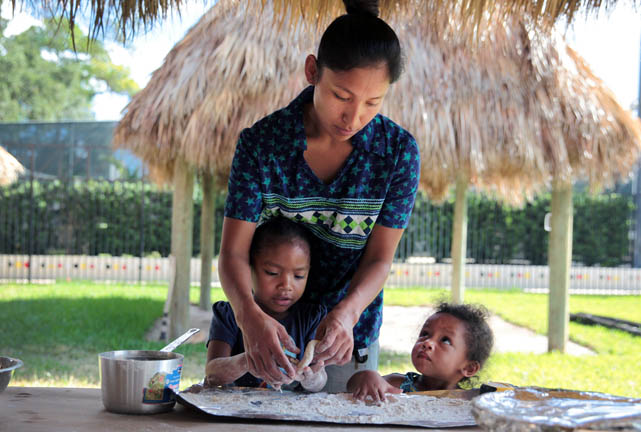 HOLLYWOOD — Novice chefs tested their skills by cooking a traditional Seminole meal with a modern twist Dec. 6 under the Hollywood culture camp chickees.

“By the end of the day, the new ones were helping each other,” he said. “That’s what it’s all about.”

About a dozen children and young adults learned to cook over an open fire and to make Indian burgers and Indian dogs. They crowded around long work tables under the cooking chickee and determined the right proportion of flour to water for the perfect frybread. Helpers, including Kurya Kippenberger, taught the basics.

“The biggest challenge is learning how to cook around the fire without burning yourself,” she said.

Young adults Krystle Young and Lacey Jordan cooked Indian burgers for the first time. Lacey was so pleased with her creation, she took a cellphone photo of it cooking on the fire.

“It feels awesome,” Lacey said. “I always love to eat them, so I knew I’d have to learn to make them eventually.”

Several children learned firsthand from the adults in their lives. Valerie Frank taught her daughter Jewel Frank, 10, and told her they weren’t leaving until she made one herself. It took several tries, but Jewel eventually succeeded and created a delicious hybrid: the Indian burger dog.

“I kept putting holes in it, so I had to start over,” Jewel said. “I kept trying until I got it right. It tastes good, and I’m proud that I learned how to make it.”

Colton Vazquez, 16, was determined to make an Indian burger, while Anthony Doctor, 11, spent his time tending the fire under the watchful eyes of Frank. He added wood to the fire as needed.

“You have to find the white spots and put the new wood there so the fire will be hotter,” Anthony said. “Bobby taught me how to do it; Morgan [Frank], too. I watched them so now I know how to do it. It feels good, but it’s hot.”

Bonnie Williams, community culture program specialist, pointed out how Seminole ancestors cooked over an open fire every day for breakfast, lunch and dinner, but some of the finer points about traditional cooking were learned the hard way.

“The lesson of the day was to stay away from the smoke,” Lacey said. “It keeps shifting and my eyes are really watering.”

“I was glad to see everyone come out and try,” she said. “They enjoyed learning and that’s a good kind of learning.”