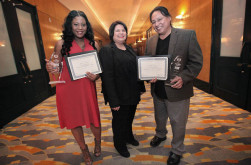 HOLLYWOOD — All eyes were on Ashley Santiago and Jimmy Hank Osceola III when a Christmas party for the Tribal Career Development (TCD) Program segued Dec. 11 into a brief graduation ceremony just as festive and fun.

Osceola, after nine years in the system that mentors motivated Tribal members through job training and into gaming careers, finally graduated. Santiago, after three and half years, will go on to phase two of the five-phase program.

“They are fine examples of people in the program. We tease Jimmy all the time about never leaving, and we really don’t want Ashley to run the tables for too long,” said Ervina Capricien, director of the TCD Program.

To keep the celebratory theme going, Trishana Storm, executive assistant to Chairman James E. Billie, delivered a message from the Chairman who was unable to attend: “Congrats to the graduates … now go get a job.”

But in fact, all trainees are employees from the start in various capacities and throughout different departments.

Hard Rock International Chairman Jim Allen said the experience is worth every step.

“It sounds cliché to say but I believe it. The person who will stand in my position one day will be someone who started at the beginning,” Allen said to the room full of Tribal trainees, families and department heads. “You guys are the owners of all of this. This is your store.”

Trainees work elbow-to-elbow with higher-level members of the Seminole Gaming team as they advance in phases. Osceola eventually became the director of Hospitality.

All Tribal members, ages 18 and older with high school or general equivalency diplomas, can apply. Betty Jones, now the director of Human Resources for Seminole Gaming, was working for the Education Department when she was asked to formalize and structure training for Tribal members.

“At the time we were building the properties up but had no Tribal members to work in them,” Jones said. “It’s always been what the government side of the Tribe wanted to do – train our own people.”

At age 53, Osceola is likely the oldest of nine graduates so far, but he is the most world traveled having spent years adventuring through 15 countries in the United Kingdom and Europe. With a degree in culinary arts under his belt from Johnson & Wales University, work experience from restaurants worldwide, and several business courses completed in Italy, Switzerland and Spain, Osceola was a unique candidate for the Hard Rock program – he is after all a rolling stone.

“‘Amazing’ is the best word to describe the training program. It’s win-win. I don’t want to be in one place forever,” Osceola said.

Although his favorite departments at the Hard Rock Hotel & Casino are based in food and beverage service (he loves working the Crossroads team member dining room), Osceola is also a good source for weighing in on new Hard Rock locations from the boardroom and on location.

For Santiago, who started the program in her early 20s, the experience is worlds from her original career plan to become a nurse.

“If you asked me four years ago what I would be doing, I would never say working in a casino. It’s crazy. I didn’t like to play cards or gamble. Now, I’m in the gaming game for free and I have been winning since I stepped in the door,” Santiago said.

So far, Santiago has been exposed to jobs in hospitality, security, slots, food and beverage and back of the house, but she dreams of running all table operations, which includes managing 2,000 employees.

Capricien said Tribal trainees follow a strict, fast-moving and challenging schedule. The only reward that comes from being Tribal is entry into the program. Sometimes, new interns become “shell-shocked” with newfound rules.

“Some, for the first time, have to be on time, work all day – I mean really work – and follow all the rules. It does not matter if you are Tribal or who your parents are. If you accrue points against you, you are out,” said Capricien, who completed the program four years ago.

Beyond the reality of 40-hour workweeks, and some graveyard shifts, recruits forge into every department while learning, working and earning a paycheck.

Training can be flexible. If trainees master four weeks of learning in two or three, they can move on to the next level. Typically, 15 to 20 interns are enrolled at any given time.

Other successful graduates include Helena Henry (Slot superintendent at Classic) and Karrisa Tommie (Revenue Audit assistant manager at Hard Rock Tampa.) On average, graduation can take four to six years, but not all interns graduate. Some discover their niche in Gaming and take on full-time jobs outside the program.

Still, the mission of the program remains constant – grooming Tribal members for the highest power careers in Seminole Gaming.

“TCD is an excellent program. You get out of it what you put into it,” Capricien said. “We’re talking about finding the next Jim Allen.”