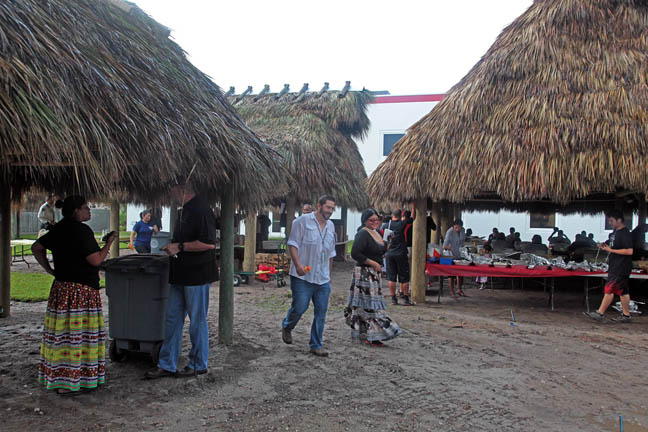 HOLLYWOOD — To help ensure the longevity of Seminole culture, a new community culture camp was erected in the shadow of Hollywood’s newest building just in time for the reservation’s Indian Day celebration Sept. 26.

Located on the east side of the Howard Tiger Recreation Center, the camp features one eating/meeting chickee, one cooking chickee and six smaller living chickees. It took nearly a month to complete.

“It was designed as a living camp and will teach our young ones how we used to live in the early days,” said Bobby Frank, Hollywood culture center manager. “We brought it here so they can see it and understand it.”

It took 178 cypress trees and 5,600 palm fronds – also collected from Big Cypress – to build them.

Since the Seminole Wars in the 1800s, chickees have served as the heart of Tribal life, Frank said. As the traditional and modern worlds intersect, the chickee still serves as a symbol of the Tribe; it even has a prominent place on the Seminole flag.

The Hollywood culture camp will evolve, much like old villages when chickees were added as needed. There is space for two additional small chickees, and Frank plans to teach boys and men how to build them.

“Having it right next to the Culture Department makes it efficient and the availability is second to none,” Frank said. “We’re really going to utilize this.”