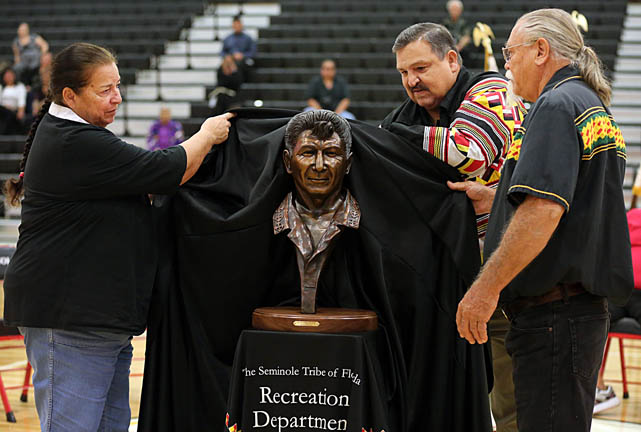 HOLLYWOOD — The Nov. 20 grand opening of the 39,000-square-foot Howard Tiger Recreation Center signaled the beginning of a new generation’s home-court advantage in sports and in life.

The late Howard Tiger, a decorated Marine who devoted his life to serving his country and community, created the Tribe’s Recreation Department and coached a generation of youth. During the facility’s dedication ceremony, his family and some of those now grown-up kids paid tribute to him for positively influencing their lives.

“He was a great coach and Tribal member,” said Howard Tiger’s son Mike Tiger. “He started the Recreation Department for us when the field was all pine trees and palmettos. We thought we were on cloud nine. It was great, and it will continue to be great for our people. This will help keep our youth out of trouble and set them on the right path, which was my father’s biggest message.”

Visitors to the center will see a likeness of Howard Tiger in bronze thanks to the skills of Bradley Cooley Sr., who with the help of Mike Tiger, sculpted a bust for the occasion. Through photos and videos, Tiger consulted with Cooley on the details of his father’s face.

Memories of the old Hollywood gym, built in the 1970s, were shared during the ceremony.

“That gym served its purpose for many years,” said Moses Jumper Jr., master of ceremonies and former Recreation director. “It was the center of everything that happened on the reservation.”

The new two-story building houses the Culture, Fitness and Recreation departments, gym, and Boys & Girls Club. Construction by Seminole/Stiles began in January and finished more than a month ahead of schedule.

“It’s been a long, long journey to get here,” Mike Tiger said. “Council has done well by creating a new facility for our youth and the community to use for learning, physical fitness and events like this one.”

Tribal members and leaders celebrated the achievement and spoke about the importance of athletics.

“Sports prepared me to be competitive on a greater level,” said President Tony Sanchez Jr.

“Howard Tiger let people like me come out and showcase what we could do,” added Brighton Board Rep. Larry Howard. “He laid a good foundation for our youth.”

Hollywood Councilman Chris Osceola spent a lot of time in the gym as a kid – so much so he was referred to fondly by Jumper as a “gym rat.” As a Tribal leader, Councilman Osceola shepherded the building from concept to construction to ribbon cutting.

“Howard Tiger instilled a lot of values to the kids he coached and they are being passed along today,” Councilman Osceola said. “Recreation centers are extremely important on the reservations. They give our kids someplace to go. Without them, there would be a lot less Seminoles today.”

Councilman Osceola said the trophies are a testament to the Recreation Department; Tribal kids now compete on a national level and play sports in college. In July, a Tribal team won the prestigious Native American Basketball Invitational.

“I think Howard would have appreciated this,” said Brighton Councilman Andrew J. Bowers Jr. “I don’t think he expected perfection, but he believed if you are going to do something, do it right.”

Some Tribal members remember playing barefoot on the concrete basketball court as kids.

“We’ve come a long way; from nothing to anything we want,” William Osceola said. “We thought we had everything when we got the outside court. This is for our youth. They’ll make memories here. The decision to build this gym is an investment in our people.”

Howard Tiger’s legacy continues to carry a lasting impact, including within his family. Nicholas DiCarlo never met his great-grandfather Howard Tiger, but he said sports made him the man he is today.

Councilman Osceola said he looks forward to the influence the center will have on the community.

“It’s something to be proud of and it’s an honor to be part of it all,” he said. “I learned from the guys before me.”

Mike Tiger was impressed with the facility and said anyone would be proud to own it. He believes it will help improve Tribal members’ quality of life.

“This is another star in the crown of Council achievements,” he said. “It’s not just about sports; it’s about learning. We’re passing along something to the next generation and saying, ‘Take notice, we’re here to help you do better, learn more and stay fit.’”

“Howard Tiger was the Jim Thorpe of our Tribe,” Jumper said.

For some, he was more than that.

“He coached us all and made sure we learned the game,” Max Osceola Jr. said. “I want to thank Mike for sharing his father with us; he had a big impact on our lives.”