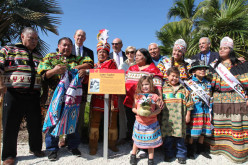 NAPLES — The late Seminole herbalist and medicine carrier Alice Micco Snow received an honor no other Seminole has ever been granted when a Florida lake was named for her in a moving ceremony Nov. 15 at Naples Botanical Garden (NBG).

Tiger-striped butterflies flitting about the cool breeze, ospreys soaring beneath blue Florida skies and 170 acres of plants and trees created a picturesque landscape as Seminole medicine man Bobby Henry removed a patchwork dress covering a permanent plaque dedicated to Snow. A photo of her as a young woman – hoisting a huge stalk of bananas – adorns the sign.

Dignitaries and members of the Tribe, tourists, workers and the curious saluted the newly named Lake Tupke amid applause in the pastoral scene. As a child, Snow received the nickname Tupke from her father. Tupke is a derivative of Snow’s Indian name Tefolothok, which is Florida Creek for “go around each other.”

And “go around” Snow did in more than 75 years of finding, preserving and carrying natural Florida medicine plants and herbs to Tribal medicine men across Seminole Country.

“A lot of people knew Alice Snow. She traveled to all of our reservations,” said Chairman James E. Billie. “But they knew her all over Indian Country; all the way out to Oklahoma, Tribes knew about her and sought her advice.”

Her impact was felt outside Indian Country as well. Duane L. Burnham, a retired CEO with the Chicago-based global pharmaceutical giant Abbott Laboratories, and his wife, Sue, donated $1 million to Naples Botanical Garden for dubbing the previously unnamed lake after Snow.

“Sue and I both met Alice at the very beginning of our association with the NBG,” Duane Burnham said. “She gave us our first tour, and we were so impressed with her knowledge, her passion for Florida’s natural healing plants.”

“We took another tour down the same road through this undeveloped area and I could visualize Alice leaning down and explaining each of the herbal plants, what their function was and how they could be used for medicinal purposes,” Duane Burnham said. “I worked in the pharmaceutical industry for a great portion of my career. Our whole industry started with medicinal and natural plants before chemical drugs were ever invented. The things Alice Snow knew were the foundation of this industry. When it became time to memorialize our gift, we both knew it should be to recognize Alice Snow.”

Snow, the daughter of Charlie Micco and Emma Micco, spoke both Creek and Mikasuki, an important skill when dealing with medicine, said Salina Dorgan, Snow’s daughter.

“My mother’s vision about the medicine to us in our family was she tried to educate us as to the importance of medicine among our Seminole people,” Dorgan said. “One of the things she always explained was that the medicine songs were always in the Seminole (Creek) language but the medicine people were more often the people who spoke Mikasuki. That played an important role for my mother because she could speak in both languages. We were very fortune because her father … brought up his children – she was one of seven siblings – and made sure that each and every one of them knew both languages.”

Dorgan said she convinced her mother to share her knowledge with the world.

“There were limited areas where you can find certain medicine,” said Dorgan, who told her mother, “If you don’t start to share some of this knowledge, there’s gonna be nobody who knows where these plants are at. You got to give the location.”

Snow agreed and the book was published.

“It doesn’t give you the remedies; all it does is just talk about the plants or the herbs that the medicine man requires,” Dorgan said.

Chairman Billie described Snow as a visionary, whose inspiration lasted for decades around important Tribal affairs.

“One inspiration of Alice’s that I remember was, I think it was maybe about the middle of the ’70s, Alice had this business side to her and she said she wanted about 2 to 3 acres to put a hotel up and a restaurant on the Brighton Reservation. I was sitting on the Council in those days and I remember thinking, ‘What the heck is she gonna do with a motel and a restaurant?’ That’s how far backwards we were in our thinking. As time went along I kind of pondered on that. She did put up a little restaurant over there. It is called Alice’s Restaurant. We still visit that place and a lot of us folks eat our breakfast there.

“As time went along, the idea of the motel lingered among myself and our people, and it happened on occasion, in the last 10, 12 years or so, that Seminole Tribe businesses have flourished. Seminole Tribe’s business is one of the best or is the best in the world. I didn’t say in Naples, I said the world. It is branded Hard Rock cafes and hotels and casinos – over 153 locations on Earth.

“Our management is the best in the world. The country of Vietnam gave us a call the other day and I went over there to check them out. We flew into Hanoi. They told us they don’t have casino management there, so they wanted our people to go over and help them and write the casino rules and regulations of casinos. That is the inspiration that Alice Snow gave us, and to this day we are very thankful that we knew her. I just wanted you to know that Alice Snow’s ideas linger on and we are doing very well with them.”

Also during the event, Henry and his family demonstrated several Tribal stomp dances similar to those that occur at the annual Green Corn Dance, while Chairman Billie narrated.

“What we never expected was the wonderful relationship that would begin to evolve with Ah-Tah-Thi-Ki Museum and the staff. I think this has been a wonderful catalyst for wonderful things to occur in the future,” Holley said.

Attendees toured the garden’s habitats and landscapes, many of whom stopped to stare out from the shoreline of Lake Tupke, calm and serene, honoring forever Tupke, the special Seminole herbalist also known as Alice Micco Snow.

“There are moments in one’s life when things come together in ways that are almost magical; I think Alice probably had more of them than most of us, given her approach to life,” he said. “She created (magical moments) for others and she is still doing so, as today is another one.”