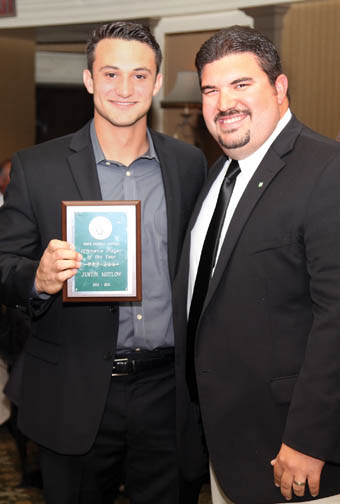 TAMPA — Capping off an illustrious prep gridiron career, Justin Motlow was honored with two major awards at the Tampa Catholic High School football banquet March 27 before a packed house of parents and players at the Tampa Club, 40 stories high in the downtown Bank of America building.

In a year in which coach Mike Gregory’s Crusaders went 10-3 and made the playoffs, Motlow led all players with 68 receptions and 96.1 all-purpose yards per game. He scored 10 touchdowns and racked up 1,151 reception yards, averaging 16.93 yards per catch.

After he accepted a preferred walk-on spot on the Florida State University football team, Motlow has been inundated with requests for press interviews, including ESPN, which published a lengthy profile on the young man who could be the first Seminole Indian to play for the national champion Seminoles.

“Right now, Justin’s main focus should be keeping in shape, working with his trainer and getting ready for football practice which begins the first of June,” said mother Lisa Motlow, who added her son decided not to participate in track this year in order to concentrate fully on football.

Three years ago, Motlow won gold medals (in his age bracket) in the 200- and 400-meter dashes at the North American Indigenous Games.

“Justin was hurt and could not play during the preseason when all the scouts were around here,” said father Clarence Motlow, who spoke to representatives of several Division I schools during his son’s senior year.

But, the phone never rang on national signing day.

“That and his height (5-foot-11) kept the recruiters away,” he said. “They missed a great opportunity because this boy is a winner. FSU did the right thing.”