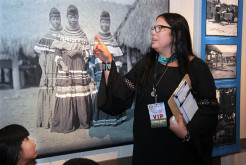 MICCOSUKEE — Tina Osceola grew up loving museums. As an adult she has made her life in that world, first as director of the Ah-Tah-Thi-Ki Museum, then as a board member of the Smithsonian Institution’s National Museum of the American Indian (NMAI), followed by president of the American Indian and Alaska Native Tourism Association. Now, she owns Tina Marie Osceola and Associates.

The firm, opened earlier this year, focuses on museum planning, development and marketing. Its most recent project was renovating the Miccosukee Museum, which held its grand reopening Sept. 22 on the Miccosukee Reservation.

“The company developed out of my lifelong passion for public awareness of Native cultures, not just my own,” Osceola said. “You get to a point in life that you want to do things that keep you close to home and that you enjoy. Telling stories through museum exhibits really is a passion.”

“That’s born of my experience in the museum industry,” she said. “Exhibit designers have a habit of telling stories only from the romantic past and forget to bring the story forward and tell people that Native culture is relevant today. To not tell it from the full perspective is damaging in the end. Some exhibits reinforce stereotypes.”

The new Miccosukee Museum exhibits explain the history and traditions of the Tribe, and focus on modern life and art. One exhibit showcases social media photos shared by Tribe members.

Osceola said Tribal leaders specified what they wanted shared in the museum.

“People will get a good idea of traditional roles of life, how it was and is carried forward to today,” Osceola said. “They will see the history of alligator wrestling and tourism in a way that is not so reality-TV-cheesy. That’s something the Miccosukees have purposefully avoided in the operation of their village and museum.”

The opening was well attended by Miccosukee leaders and Tribal members, tourists and even a couple celebrities. Native American actor Adam Beach – who narrated “So We May Grow,” a film about the Miccosukee Tribe’s culture, preservation and growth shown at the museum – served as master of ceremonies for the ribbon-cutting.

Miami Marlins third baseman Casey McGehee had the day off from baseball and brought his family to the event.

Miccosukee Chairman Colley Billie said the museum hadn’t been refurbished for 30 years. He thanked Osceola and her team for doing the job well and allowing the Tribe to share its culture.

Osceola, who has a bachelor’s degree from Rollins College and a master’s degree from Nova Southeastern University, admires the NMAI and says it epitomizes the perfect Native American museum. If she could get another museum to tell the story of indigenous people, she would start at home with the Museum of Florida History in Tallahassee.

“I’d have the entire state review its interpretation of its Native people so our relevance is realized today,” Osceola said. “And that we aren’t seen as a piece of Florida history only to be studied by anthropologists and archaeologists. That’s the role of any Tribal museum as well.”

The challenge of the renovation was working with a repurposed building and overcoming structural issues. Osceola cites the strong teamwork of her team, the museum staff and Miccosukee employees. Even her 80-year-old father, O.B. Osceola Sr., worked with her every day, which she said meant the most to her.

“I’m elated,” Osceola said at the opening. “I feel like it’s my baby. This was one of the most rewarding experiences of my life; it was a true team experience. I don’t think I’m ever going to match this.”