Skip to content
You are here
Home > Community > A day in the life of Mr. Backhouse 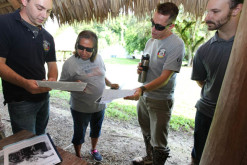 BIG CYPRESS — On any given day Paul Backhouse, director of the Ah-Tah-Thi-Ki Museum and Tribal Historic Preservation Officer, has his nose to the grindstone. His feet give hints to the task at hand.

Doc Martens shoes mean he’s trucking through the daily business of managing his 40-member staff at the Museum’s 70-acre campus.

Purple sneakers were perfect for the Sept. 20 opening of Ramp It Up, a Native skateboarding exhibit on loan from the Smithsonian Institution in Washington, D.C.

Weathered field boots – camouflage, waterproof and snake resistant – are a sure giveaway that Backhouse will embark with researchers to a site that could yield historical details from the past and reasons to protect its future.

On the way Sept. 16 to Josie Billie Camp on the Big Cypress Reservation, Backhouse filled the minutes between the Museum and the scene north of Eight Clans Bridge with talk about a field project for students at Pemayetv Emahakv Charter School in Brighton.

“It will turn archaeology on its head,” he said.

Maureen Mahoney, a Tribal Historical Preservation Office (THPO) archaeologist, will lead several classroom lessons about archaeology and local history and take the children to a non-Seminole settlement inside a dense hammock. There, the students will recover objects and offer probable conclusions for discoveries.

“There are plenty of non-culturally sensitive artifacts there,” Mahoney said. “It will be interesting to see how students interpret what they see.”

Interpretation is the backbone of what ends up in history books, Backhouse said.

“It’s mostly usual that Colonial blokes interpret what Native history is. This will let the Seminole children say what they see,” said the native of England who was raised on the Isle of Wight.

At the Josie Billie site, Backhouse, Maloney, field technician Matthew Fenno and research assistant David Brownell began the complicated process of documenting the scene so that later, if the Tribe requests, a historic marker could be erected.

They walked through an upland area and then suddenly into a dip where wetland was thick in cypress knees, native fauna and scores of mosquitoes. There, the team noted vintage glass bottles, chunks of cement and sheets of fabricated metal that could be the bulldozed remains of the Josie Billie camp.

“We look for things 2,000 years old but we also look for things 20 or 50 years old. It’s about what is important to the community,” Backhouse said. “In this case, we have a main street that cuts through the reservation called Josie Billie Highway, but very few people know who he was and the very important role he played.”

Some documentation says Josie Billie lived at that location from 1943 until he passed on Feb. 24, 1980. A medicine man, he infused Native teachings with Christian beliefs and became a Baptist preacher. Billie operated a small store at the camp with his wife, Lucy Tiger Billie, who also kept a large cooking chickee and several sleeping chickees – one large enough for frequent guests.

Fenno said the team used archival photographs and aerial maps to perceive the camp. A photo from 1964 shows a small structure with a sheet metal roof.

“For this project, we only have points of interest from the maps and pictures,” he said.

But verification from Virginia Tommie, who has lived nearby for decades and whose memories match the photographs and maps, would clinch the day.

“I may be the oldest to relate to the scene and remember. It’s too bad that the younger generations have no clue,” Tommie said when she arrived at the scene a short while later.

Tommie joined the researchers on the site with a photo from the 1970s taken in front of her home with Josie Billie’s camp clearly in the background. Tommie’s hand-drawn map of the camp, based on her memory, also matched the Museum’s archival photos.

“The information Virginia gave us is like gold dust,” Backhouse said. “We can think we are 99 percent right about something, but when a Tribal member comes out and knows exactly where things were, it’s a great reality check. They keep us honest.”

Backhouse, 39, earned a doctorate degree in archaeology from Bournemouth University in England and became a field archaeologist for the Museum of Texas Tech University. He met his wife, Tara Backhouse, now the collections manager for the Museum, while on a project in Lubbock.

“She was the photographer who had to come out and photograph everything we found. I made sure we found a lot of things. It worked,” Backhouse said.

He joined the Museum as a chief data analyst in 2007.

Now head of all Museum and THPO employees and departments, Backhouse is also called on daily by outside companies, other Tribes and government agencies who request help to comply with the National Historic Preservation Act of 1966, the Florida Historical Resources Act (1967) and the Cemetery Act (1990). The laws require that archaeologic surveys be conducted at sites designated for any sort of disruption, from erecting street lights to building shopping malls.

In July, he testified in court to significant Tribe-related discoveries on Florida Power & Light property just north of the Big Cypress Reservation border. Findings included a military trail and several early Seminole artifacts that could thwart the power company’s plan to build a massive plant on the 3,200-acre site.

But his workday is not always about academic discoveries and documentation.

On a recent Tuesday, Backhouse gave his thumbs-up to the newly installed “Ramp It Up” exhibit, approved an advertising flier for a Tribe-related event at Naples Botanical Gardens, and introduced a guest to floor-to-ceiling wall art in the Museum’s lobby that shows John Motlow gigging through the Everglades circa 1930.

Currently, Backhouse is awaiting the publication of two books written jointly by his staff and Tribal members: “Finding a Seat at the Table,” which is a how-to about THPO, and the first Creek dictionary called “Este Semvnolvlke Enponakv, The Language of the Seminole People: An Outline Grammar and Basic Dictionary of the Florida Seminole Creek.”

“I’m busy, but it’s not me out here killing myself. We all work together and I trust the staff every single day of the week,” Backhouse said.

A vegan, Backhouse has earned a special nickname from Chairman James E. Billie: the bad hunter.

But Backhouse calls himself “a servant of the Tribe.”

“You have to be willing to roll up your sleeves in life. That’s what work is all about,” Backhouse said.