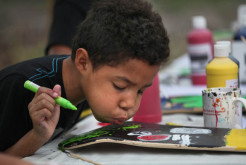 BIG CYPRESS — Using decks as canvas, a dozen Tribal youth marked the opening of the Ah-Tah-Thi-Ki Museum’s newest exhibit, “Ramp It Up: Skateboard Culture in Native America,” by painting their own versions of colorful skateboard art Sept. 20.

Some drew detailed graphics in pencil before putting paintbrushes to wood – such as the Teenage Ninja Mutant Turtle motif created by Alena Stockton.

Jalycia Billie said she was inspired by multicolored Southwest Indian art designs to bring bold and bright geometric shapes to her deck.

Jaylee Cypress used Seminole colors to lay simple red, yellow and black sections to her deck before employing her palm and fingers, dipped in white paint, to mark the board with her handprint.

The exhibit, on loan through Nov. 9 from the Smithsonian Institution Traveling Exhibition Service (SITES), was last featured at the Mashantucket Pequot Museum in Mashantucket, Connecticut.

According to the SITES Web page, the exhibit highlights the history of skateboarding as a popular reservation sport since its roots in West Coast Native American and Native Hawaiian surfing communities of the 1960s.

Rebecca Fell, the Museum’s curator of exhibits, said the newly created skateboards will be entered into a skate deck art competition to be judged Nov. 7-8 during the American Indian Arts Celebration (AIAC).

AIAC activities will also include a skate jam and contest on a mobile half-pipe ramp that will be staged in front of the Museum.

Alena, who skateboards “wherever and whenever” and can do a front side 180 and a kickflip to fakie, said she stands a chance at winning. Two years ago she won stickers and a T-shirt during a skate competition in Denver, Colorado.

“It can be scary on the ramp, but it’s fun, it’s exciting and it’s really relaxing – especially after a stressful day at school,” Alena said.