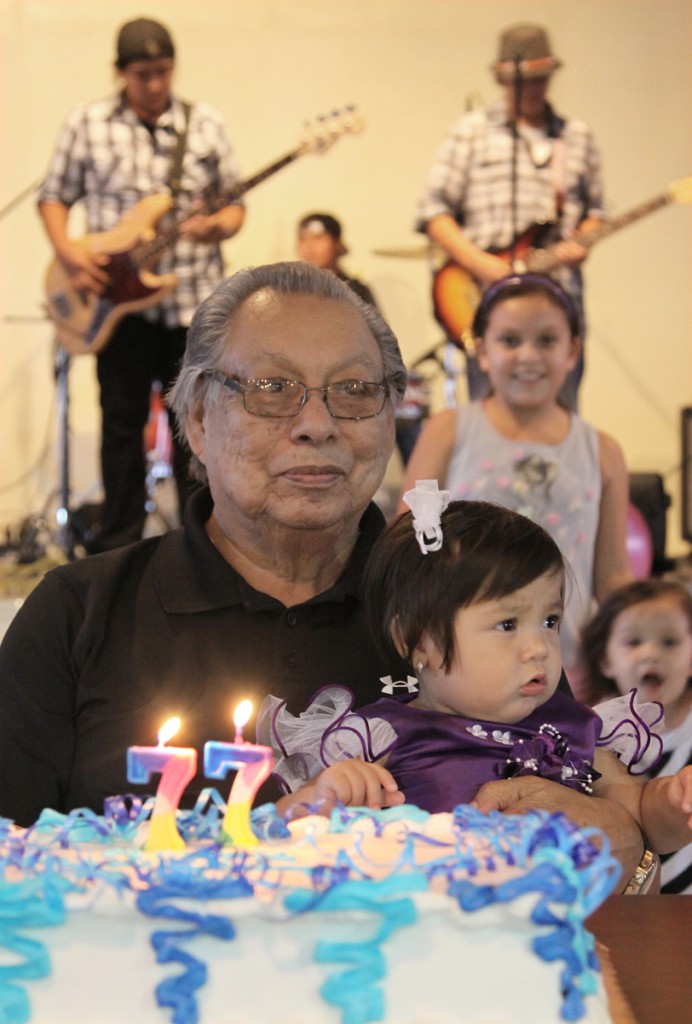 HOLLYWOOD — With his 1-year-old granddaughter, Teyah, nestled on his lap and dozens of family and friends singing in the background, Jimmy Hank Osceola blew out the candles atop his birthday cake on July 10. He celebrated his 77th birthday – he thinks – and his granddaughter’s first.

“I feel just the same as yesterday and the day before,” he said about turning another year older.

Born sometime around July 10, 1936, Jimmy may never know his exact birthdate. The Bureau of Indian Affairs (BIA) assigned him the date using the best estimate from his parents, Jimmy Osceola and Mary Motlow Osceola.

“I was born in the Everglades where they don’t keep dates,” he said. “A BIA agent came through the different camps to get a census and the closest dates of the kids’ births. They guessed my birthday.”

Jimmy and his 13 siblings – four of whom passed away as children – lived solitary lives amid swamps and alligators in Tamiami Trail. To support the family, their father hunted and operated a “little Indian village,” where they sold souvenir dolls and beadwork and displayed caged wildcats, bobcats, raccoons and alligators for tourists.

“People came to learn about our culture,” he said.

Jimmy’s mother maintained their camp and cooked for the family. Common meals consisted of garfish, mudfish, turtles and birds foraged by their father and sweet potatoes, beans, corn and pumpkins grown in the family garden.

During season, the Osceolas traveled across South Florida searching for vegetable fields in need of harvesting. They picked tomatoes and potatoes, mostly, in Miami and Homestead, and gathered hay in Moore Haven. Selling and trading alligators, birds and garfish scales – for use in jewelry making – supplemented their income.

“We used to travel what seemed like a long way but today you get there in 20 minutes,” Jimmy said. He was responsible for carrying pots and pans and water when they traveled, on foot, in search of work.

When he was 9 years old, Jimmy and his family built chickees for their first permanent camp built on land owned by his brothers’ employer. Prior to that, they lived in tents that easily set up and broke down. But in 1946 when Jimmy’s father passed away, the family found themselves again traveling around to make a living. Three years later, they made their way to the Indian Reservation in Hollywood, where Jimmy’s brother Bill – the Tribe’s first President – lived.

“In 1949 we came and never left,” Jimmy said. “Everything was different because we never lived close to non-Indians. They were all around us.”

The lifestyle change brought new opportunities for Jimmy. In 1952, his brother Max sent him to an Indian boarding school in North Carolina for a formal education. Two years later he transferred to Sequoyah High School in Oklahoma.

“I didn’t know how to speak English,” Jimmy said, “but they didn’t let us speak Mikasuki because they wanted us to learn to speak English. If we spoke our language we had to wash dishes.”

Jimmy also learned mathematics and reading, and although he admits to not liking school at first, he later adapted to his environment and graduated with his high school diploma in 1958.

He returned home to a newly recognized federal Tribe.

“I read about the recognition of the Tribe in an Oklahoma newspaper while at school,” Jimmy said. “I saw the picture of my brother. It was exciting.”

Also in the photograph – unknown to him at the time – was his future wife’s grandmother, Louise Billie casting her vote in the ballot box.

Because Jimmy was responsible for cutting his classmates’ hair while at boarding school, he decided to pursue the trade as a career back home. He completed six months and 2,000 hours of school to earn a  barbers’ license and landed his first job shortly after. He earned $1 per haircut.

“You had to be fast to make money,” he said.

Jimmy met his wife, Marie, in 1959, and married her just one year later at Miccosukee Church. Bill officiated. During the ensuing years, the couple had four children and adopted one: Jimmy III, Tammy, Todd, Amy and Matthew Paul. Raising their children with Christian beliefs and educating them about their Seminole heritage was a priority for Jimmy and Marie.

“They learned about Clans, and the other reservations and their lineage,” Jimmy said. “At the same time, we wanted them to learn the Bible and obey the word of God. They seem to be doing that pretty good.”

Jimmy later went to work for a Tribal neighborhood youth program geared toward teaching kids responsibility. In 1971, he became the Miccosukee Church pastor, a position he held for 17 years. Through it all, he kept returning to the barber shop.

“There was just a feeling I had at a barber shop,” he said. “I liked working with the people.”

As his children grew, Jimmy discovered a love for traveling and he now hopes his future includes  exploring new cultures. Paris is on his bucket list.

Still setting a  good example for his family and his Tribe, Jimmy  enjoys spending time with his 24 grandchildren and 12 great-grandchildren who he sees as often as possible. He remembers his roots and looks forward to continued prosperity.

“It’s a lot of fun to be alive today and enjoy what we can from our Seminole Tribe’s doing,” he said.