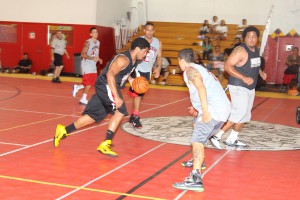 BIG CYPRESS — During one of the Tribe’s longest-running basketball tournaments, the spirit of the late Herman L. Osceola lived on from March 22-24.

The special basketball event began soon after the Tribal honoree’s death in 1984, when the 24-year-old was killed in a helicopter crash on a U.S. Marine Corps mission to Japan.

Osceola, who enlisted in the military in 1983, helped ignite a Tribalwide interest in basketball while he served as a Big Cypress Recreation employee. Best known by the Big Cypress Community as an advocate for Tribal youth sports, the former U.S. military serviceman is also remembered for playing an integral role in the 1980 erection of the Big Cypress gymnasium.

The gymnasium where Osceola played basketball was dedicated to him less than five years after he passed.

Osceola’s sister, Caroline Osceola, said she carries him everywhere she goes. And just like in years past, she opened up about how his legacy lives on today.

“I’m proud to see my brother’s memorial still going on,” she said. “I can see him in my heart and in my spirit. He’s still around, smiling big on us from heaven.”

“We appreciate them for showing their love and support for my brother,” Caroline said. “It was such a joy to see them all.”

It wasn’t a sure thing that Plainzmen would end up winning the men’s title.

However, when the team took on Brighton’s B-Town Bad Boyz in the final, there was no doubt about Plainzmen’s fate.

The two teams played each other for the second time, thanks to a 63-61 double overtime victory by B-Town in their first matchup, which sent Plainzmen to the loser’s bracket.

Plainzmen used that single loss as motivation to dispatch B-Town 49-41 in the title game. They trailed for only 23 seconds in the final, as B-Town scored the game’s first bucket with 13:33 left in the first half.

Plainzmen’s Solomon Horsechief, who scored 4 points in the final, sliced through the heart of B-Town’s defense to cap off an early 6-0 run with 12:24 left in the first half, giving his team a 6-2 lead.

The closest B-Town would get the rest of the way came off a 3-pointer with 7:23 left in the first frame, pulling B-Town to an 8-7 deficit – a 1-point margin.

With 7:01 left in the first half, Plainzmen’s Jim Archaubault, who scored 14 points in the final and four 3-pointers in the game, connected on a game-changing 3-pointer that gave his team an 11-7 lead.

From that point on, Plainzmen clamped down on defense for much of the first half to take a 27-16 lead into halftime.

“We switched up from zone to man on defense,” said Plainzmen’s Ronnie Battle, who scored a game-high 15 points in the final. “Once we made the switch, we disrupted their shooting flow, and they couldn’t get their shots off.”

Plainzmen held off a late rally in the second half from B-Town, who got to within 3 points with 1:32 left in the title game. A few hustle moves and a layup from Tony Osceola, who scored 6 points in the final, cut Plainzmen’s lead to 42-39.

And after a 3-point play by Plainzmen’s Kevin Hanks with 59.7 seconds left, Plainzmen led 45-39. Then, B-Town’s Duelle Gore made his team’s final jump shot of the tournament with 49.3 seconds left, cutting Plainzmen’s lead to 45-41.

With time running out on B-Town, they fouled Plainzmen’s players several times when on defense, hoping the Plainzmen players would miss their free throws.

Plainzmen ended the game on a 4-0 run, making four out of six free throws to take the championship with a 5-1 record.

“Our shots just weren’t falling,” B-Town’s Gore said. “We couldn’t trade buckets with them like we did the first time out. They just played real good defense.” They finished with a 3-1 record.

The ABC women’s team outlasted Ball Hawgz 38-19 in the women’s championship game, thanks to a strong defensive effort from the tournament’s top ladies squad.

ABC beat Ball Hawgz twice in the women’s competition, including a preliminary win early on, landing ABC a 3-0 final record. Ball Hawgz came in close behind with a 2-2 final record.

After winning the All Heart men’s Legends tournament this past February, the Rebels took their second consecutive men’s Legends title at the Herman L. Osceola Memorial Tournament.
The Rebels defeated Living Legends 30-24 in the final to take the win, giving the Rebels a 3-0 final record.

Living Legends ended with a 1-2 final record, having also lost to the Rebels in the Legends tournament’s first round of play.

Hollywood finished third overall after losing their games to the Rebels and Living Legends.
Meanwhile, in the women’s Legends’ best-of-three series, Southern Smoke won the first two games against Ball Hawgz to win the championship.