Skip to content
You are here
Home > Sports > Team Florida takes on Milwaukee at the 2011 U.S. Indigenous Games 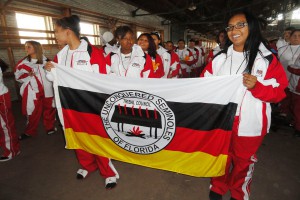 Team Florida competed in seven of the nine available sports: archery, basketball (four teams), golf, shotgun shooting, softball (two teams), track and field and wrestling. Each evening medals were awarded to those athletes whose final competitions were held that day. Team Florida placed third in the overall number of medals won throughout the week, behind Teams Wisconsin and New Mexico, who had much larger delegations. Even more impressive is that Team Florida medaled in every one of its seven sports.

While the victories and medals were the goals of the athletes and coaches, there were some very memorable moments and personal achievements that showed the true spirit of Team Florida.

More than 10 community members became volunteer coaches, including Wildcat Naha Jumper, Abner Rockwell, Preston and Ramona Baker, Andrew Jordan Bowers, Jonathon Ordway, John Jumper, Joe Frank and Colleen Henry. Their dedication to the young athletes and the hours they devoted to practice sessions and competitions in Milwaukee made the successes even more valuable.

With more than 150 Team Florida participants and even more family members staying at the DoubleTree Hotel, it quickly became apparent that everyone was pitching in and pulling together. Not only did people do their assigned jobs, but a number of chaperones were suddenly asked to coach teams when the original coaches did not show up in Milwaukee. There were also coaches who doubled as chaperones to some young athletes whose parents could not travel to the Games.

Team Florida athletes and coaches showed great sportsmanship both on and off the field. Hotel staff complimented the youth on their manners; the Host Society commented that Team Florida athletes were one of the best-behaved groups at the Games; and when several umpires/referees made biased calls against Florida, the athletes proved they could carry themselves with the honor and dignity that the officials lacked.

Finally, a true sense of team spirit played out as Team Florida participants moved through the competitions, activities, ceremonies and events. Even the SPD officers and Seminole EMTs who traveled to Milwaukee to provide their services found themselves caught up in the excitement of the competitions and medal ceremonies. The athletes, coaches and support staff attended each others’ games to cheer on fellow team members. The lobby of the hotel was the gathering point for the group, and the easels used throughout the week announced the Florida medal winners for all to see. Morning coaches’ meetings prepared everyone for the day’s activities and allowed issues to be discussed and resolved daily.

The future of team Florida and the games

The next three years will be filled with organization, planning and participating in scheduled Games. For the remainder of 2011 and throughout 2012, Team Florida organizers will work with community volunteers and support staff in what will be referred to as “Off-Year Organization and Team Development.” This group will assess the strengths and weaknesses of the Milwaukee Games, develop Team Florida governing rules and guidelines, establish ongoing sports practices and tournaments, identify athletes who will be ready for future Games and attend working meetings of the North American Indigenous Games Council.

In 2013, Wisconsin tribes plan to hold the next U.S. Indigenous Games and will focus on increasing the number of participants. These games will serve as preparation for the athletes to participate in the 2014 North American Indigenous Games.

Regina, Saskatchewan will host up to 5000 athletes from the United States and Canada in the 2014 North American Indigenous Games. There will be approximately 15 sports available to the teams from the Canadian Provinces and from individual states, such as Team Florida.

Team Florida 2011 proved successful on many levels. With a total of 17 medals there was no shortage of pride and excitement each night at the award ceremonies. These accomplishments, combined with exceptional sportsmanship and team spirit made this year’s team stand out among its peers.