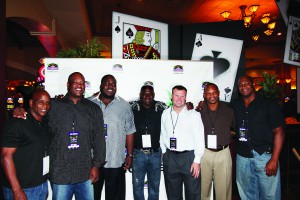 COCONUT CREEK — Although known for its 1,500 gaming machines and 20 blackjack tables, the Seminole Casino of Coconut Creek does more than offer the community a place to play Las-Vegas-style slots and Texas Hold ‘em. The casino also hosts charity events to benefit local nonprofit organizations, and since 2001, has raised $590,000 for charities in the process.

Several times a year, the casino puts on these events, which draw in many local celebrities, to give back to the community and to show support of the organizations that do so much for individuals in need.

“We try and do charitable work every year that matches the qualifications of the Seminole Tribe,” said Michael Michaud, Seminole Casino Coconut Creek vice president of marketing. “We like to only focus on two to three each year so that we can really dedicate our time and energy to them.”

Michaud said charities with close ties to the Coconut Creek casino family include the Ronald McDonald House – which provides a “home-away-from-home” for families so they can stay close by their hospitalized child at little or no cost – and the Coconut Creek SOS Children’s Village – a foster care neighborhood in Coconut Creek that responds to the needs of children left orphaned or abandoned.

But many other charities benefit as well.

For example, on Aug. 31, some of Florida’s best-known gridiron greats came together to raise money for their favorite charities and to celebrate a milestone amongst Tribal casinos. In celebration of the one-year anniversary of legalized blackjack, the Seminole Casino Coconut Creek played host to a 64-seat, invitation-only tournament. The event featured several former National Football League players including Miami Dolphins Zach Thomas, Keith Simms and Leon Searcy with each donating their winnings to their favorite cause.

The event raised close to $15,000 to benefit a range of charities including the Dolphins Cycling Challenge (for Cancer), the Alzheimer’s Family Center, Joe DiMaggio Children’s Hospital Foundation and the Broward County Youth Club.

“It is all about giving back to the communities,” said Dan Mackey, public relations vice president of Bitner Goodman Inc. “Steve Bonner (General Manager of Seminole Casino Coconut Creek) is always happy to do these types of things.”

Coming into the tournament, Errict Rhett, former Tampa Bay Buccaneers star running back and president of the Errict Rhett Foundation, was very confident, predicting he would win the $5,000 in first-place honors for his charity: “We (my foundation) need it and we are going to win it,” Rhett said. His charity, which supports at-risk urban youth, began in 1999 and went on to win the second-place prize of $3,000.

Recently retired former Jacksonville Jaguars/New England Patriots NFL All-Pro running back Fred Taylor also participated in the event to raise funds and awareness for his charity, the Fred Taylor Foundation, which began in 2009 to help socioeconomic and physically challenged children while striving to improve their quality of life, according to the foundation’s website. Taylor raised $500 for his charity and said the Tribe’s accomplished history inspired him to be a part of the evening.

“What they (the Seminole Tribe) have done is amazing,” Taylor said. “I would love to leave a legacy like they have, and it made me want to be a part of something like this type of event.”