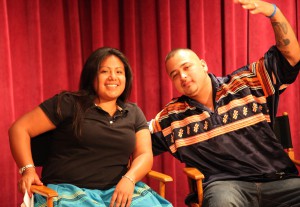 HOLLYWOOD — Seminole Media Productions Broadcasting division staple, the Seminole Channel Show, has undergone a makeover of sorts for its viewers.

New Tribal reporters Miranda Motlow of the Tampa Reservation and Stephen Billie of the Hollywood Reservation will have the opportunity to fill some big shoes, replacing popular, longstanding former hosts Briana D’Andrea and Everett Osceola.

The two new reporters met for the first time at the most recent Youth Media Production Workshop in Hollywood in early July.

For Motlow, the eldest daughter of Carol Foret, the opportunity to try and take over the reigns gained momentum after the departure of D’Andrea.

“I felt I would eventually get another shot,” Motlow said. “I did not expect it to come so fast though. I was actually unsure. It was kind of fear of the unknown.”

“Everything I have done in the past (occasional reporting and fill-in hosting) was just in preparation for this moment. I thought to myself, ‘If I do not do it now then will the opportunity come again?’” the 25-year-old of the Panther Clan added.

Billie, Otter Clan and son of Steve Osceola and Rita Billie, said the experience is a blessing he wants to learn and grow from.

“I want to stay a part of this as long as I can,” he said. “It is great, and I am trying to take advantage of the opportunity. I want to bring more people to the show.”

“For people to know I overcame a lot and be a role model and represent the Tribe makes me proud,” Billie continued.

He said he gained respect for Motlow and recognized their potential together after watching her in a Seminole Focus profile story.

“I respected the fact that when she was on camera she let it all hang out. She was herself. I liked that about her and wanted to add that to my own on-air approach,” he said.

For Motlow the experience has become one of enjoyment all while she continues to learn more about the broadcasting industry.

“I actually enjoy it,” she said. “I have done my fair share of not taking advantage of all the opportunities my people have provided for me. It has turned out to be a wonderful thing so far.”

Billie is somewhat familiar to the media as a budding hip-hop artist with several CDs to his credit. “It is all entertainment and similar to rapping,” the married father of two said. “(When I rap) I am just getting up there on stage and presenting something. I think they (hosting and rapping) fit together.”

Tune in on Tuesdays from 8-9 p.m. and Thursdays from 5-6 p.m. on DIRECTV Channel 575 and Comcast Channel 92 or 93 (depending on HD compatibility). And also visit www.youtube.com/seminolechannel to see all videos featured on the Seminole Channel Show.