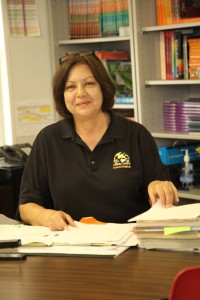 She recently started her 30th year teaching at the Big Cypress school and has witnessed a lot of growth on the reservation throughout the years.

“I remember they told me when I first came to fill up my car because there was only one pump,” she said.

She remembers when the reservation didn’t have a gymnasium or Tribal police and fire departments; when the clinic used to reside next to the school; and when Ruby’s and Joe Osceola’s Stores were perhaps the only ones around.

During her first year at Ahfachkee, in 1979, the Muscogee Creek Tribal member was one of about a dozen staff members, while today the school employs about 80 people.

Through the years of change, one thing remained constant: Tiger’s passion for teaching kids.

“I just enjoy teaching and watching them learn,” said Tiger, 59, who teaches third-graders this year. “I’m like a mama to them.”

Although she initially considered nursing, Tiger quickly chose the path that three of her brothers and her aunt took. She couldn’t help but crave a job that would give her summer and holiday breaks, she laughed.

But not everything about teaching came naturally to her; she felt intimidated about speaking in front of the class.

“I was always shy, and I didn’t think I could teach older kids,” she said. “I was always afraid to speak in public.”

Tiger became increasingly comfortable among elementary school students and found her niche teaching kindergarten through third grade throughout her career. She has taught at several schools since completing her bachelor’s degree in elementary education at Northeastern State University in Oklahoma in 1975. She landed her first teaching job at her old elementary school, Twin Hills, in Oklahoma.

“The first year teaching is the best experience,” she said. “You can’t get it out of a book.” 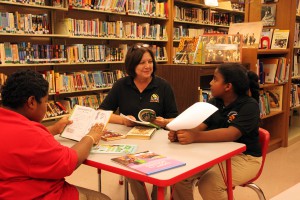 She spent the next couple years teaching in Mississippi and Oklahoma. In 1979, she moved to Florida and started teaching at Ahfachkee. She said the Tribe invited her to live on the reservation.

“I was welcomed,” the Clewiston resident said, recalling the trailers that she and a few other teachers lived in near the school.

Although she moved between Oklahoma and Florida a couple more times over the next three decades, she kept returning to Ahfachkee and found her home there. She said she enjoys working in a Tribal community with culture similar to her own.

Tiger said she also enjoys the small class sizes – she has six students this year – and the generous resources at Ahfachkee.

“Public schools have limited budgets, but here, whatever you need you get,” she said, mentioning furniture and classroom supplies as examples.

And although keeping up with technology can present a challenge, she said she embraces her new Smart Board to incorporate more games and interaction into her math lessons.

When it comes to her strengths as a teacher, Tiger shines at teaching math.

Tiger also likes preparing students for the annual Science Fair by conducting experiments with them, such as making slime, giant bubbles and miniature volcanoes.

In addition to teaching, Tiger worked in administration at Ahfachkee from 2004-2006 and served as acting principal in the early ‘80s and again in the early ‘90s.

Tiger’s almost on her third generation of students, and she plans to continue teaching at Ahfachkee until she retires.