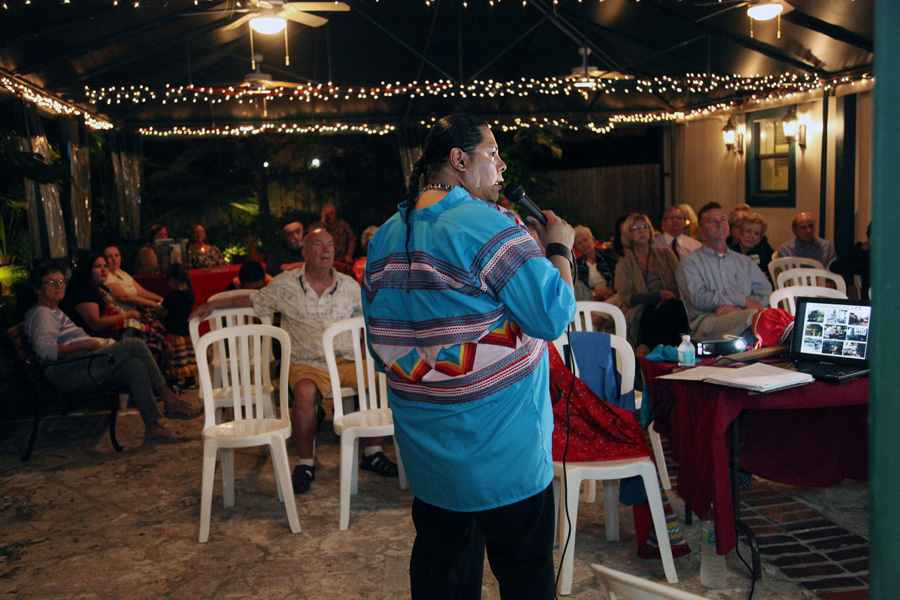 FORT LAUDERDALE — The history of Fort Lauderdale couldn’t be told without including the relationship between local pioneers Frank and Ivy Stranahan and the Seminole Tribe of Florida. Van Samuels, from the Ah-Tah-Thi-Ki Museum, discussed the bond at a lecture held at the Stranahan House in Fort Lauderdale on Jan. 16.

It was the first lecture in a series called Seminole Stories, aimed at educating the public about the Tribe.

“The Stranahans and the Tribe were very good friends and had a great working relationship,” said Samuels, Museum Community Outreach specialist. “It’s good to be able to come together and tell these stories; there is no more fitting location than the Stranahan House. Ivy Stranahan would be happy to see a group of Seminoles here now.”

In the beginning of the 20th century, the Tribe regularly traveled by canoe on the New River to trade at the Stranahans’ trading post. They sold deer hides and purchased fabric. Frank Stranahan built his house with wide porches on the river, also the site of the trading post, so the Seminoles would have a place to sleep when they came to trade – sometimes for days at a time. A former school teacher, Ivy Stranahan founded Friends of the Seminoles to educate Tribal members, which she led for more than 50 years.

During the event, Samuels also discussed food and clothing customs of the Seminole Tribe. In his introduction to traditional Tribal food, Samuels explained that all things in nature were given by the creator for the Tribe’s survival, but they had to find it. Staples included corn, beans and squash – the three sisters – but they also grew pumpkins, potatoes and tomatoes. Wild foods included swamp cabbage – the heart of the Sabal palm tree, coontie – for making flour, bananas, coco plum, pond apples, oranges and guava.

“A great deal of effort was put into these foods,” Samuels said. “The women would grind the corn with a heavy pestle every morning. They would grind enough corn for the entire camp to eat for the day; it was hard work. The men hunted, the women prepared the food and took care of the camp. But the men and children always ate first.”

Today, he explained, Tribal members enjoy the same food as everyone else in addition to traditional frybread, stewed beef, sofkee and Indian tacos.

“A lot of folks who come to the Museum think we still eat berries and hunt in the wild,” Samuels said.

Today’s familiar patchwork clothing was originally made on hand-crank Singer sewing machines invented in the mid-1800s. It has always been an artistic, yet tedious, endeavor for the women who create it. Men traditionally wore big patchwork shirts with loincloths underneath, as well as colorful sash turbans decorated with ostrich feathers.

Deerskin was an integral part of men’s clothing for life in the Everglades; deerskin leggings and moccasins helped protect legs from sharp sawgrass. The skins were tanned with a mixture of deer brains and water, which gave them a uniquely soft and supple texture. This quality also made them popular at the trading post.

Samuels showed numerous photos dating from the 1800s to present day illustrating how traditional clothing hasn’t changed significantly over the years. After the presentation, the crowd at Stranahan House perused a display of traditional items, including dolls and clothing.

“We’ve been so excited to have the Seminole program here,” said Sandy Casteel, president of the Board of Directors for the Stranahan House. “We are so glad they are bringing their culture to the east side.”

About 40 people gathered at the historic site for the presentation.

Other programs in the Seminole Stories series include “The History of Seminole Wars,” March 20; “Camera-man: The Seminole through the Lens of Julian Dimock,” June; “Alligator Wrestling and Tourist Camps,” Oct. 16; and “Christmas with the Stranahans,” Dec. 4.