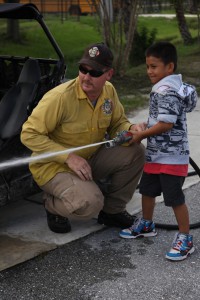 BRIGHTON — To tie in with Fire Safety Week and to inform students about the importance of fire safety, staff from the Tribe’s Fire Rescue Department educated students in kindergarten through second grade at Pemayetv Emahakv Charter School on Oct. 10.

“The theme for Fire Prevention Week this year is having two ways out of your home,” said Fire marshall Bob Brown. “It’s important because of life safety. Fires that occur in the home usually occur at night, and they have a very short time of getting out of the house to get to safety before smoke makes it difficult or even impossible.”

Students practiced using the fire extinguisher by following the acronym PASS, which stands for Pull, Aim, Squeeze and Sweep.

Firefighters also built a room that replicated a house filled with smoke. Students practiced crawling low under the smoke and learned to have a meeting place outside their homes.

During the last fire safety demonstration, students watched a puppet show demonstration that reinforced “stop, drop, and roll,” a technique that should be used if clothes catch on fire. Afterward, students practiced rolling out the fire.
For fun, students used the fire hose to knock down a water bottle.