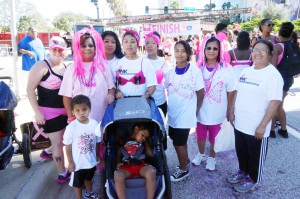 TAMPA — A sea of people in pink bras took to the streets of Tampa for the American Cancer Society’s annual Making Strides against Breast Cancer 5K walk on Oct. 20. To spread the message, many wore pink bras over their shirts, while others wore shirts with faux bras painted on the front.

More than 14,000 people participated to raise awareness, honor survivors and raise money for the fight against breast cancer. About 30 Tribal members joined the Seminole Hard Rock Hotel & Casino’s Rockin Walkstars (employees) at the Tampa Bay Times Forum. The team of about 240 people raised $12,655 out of the total $385,044, more than any other company.

Korin Deitch, nutritionist and health educator with the Health Department, organized the Tribe’s participation in the event. To prepare, she educated people on the importance of early detection, and then they decorated T-shirts and bras.

“It’s a fun event. There is a lot of really good energy,” she said. “We got together before the walk and had a little pep rally to get people excited about it.”

Tampa senior Nancy Frank, 62, has been a survivor for nine years and still gets checked every six months. She brought her sisters, daughters, grandson, great grandchildren and nephew with her to the walk.

“I’ve walked before, maybe four or five times,” Frank said. “It was a beautiful day. Grown-ups and babies were out there. It was a good time. I walked for everybody. It isn’t easy, but you have to move on after cancer.” 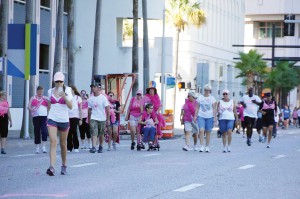 According to the American Cancer Society, since 1993, 8 million walkers have raised more than $460 million to help fight breast cancer at Making Strides against Breast Cancer events. Among women, breast cancer is the second most common cancer and the second leading cause of cancer death. The rate of breast cancer deaths, however, has steadily declined since 1990.

“I told my daughters to go once a year to get checked, before it is too late,” Frank said. “I tell people, ‘I survived and you can, too. You have to be strong; don’t be angry or sad. Try your best and just enjoy yourself and your family.’”

Frank takes her own advice. She has a grandchild and three great-grandchildren and is happy every time she sees them.

Today, there are more than 2.5 million survivors in the U.S.

“I think the event was inspiring,” Deitch said. “Seeing all the people and the survivors walking, including some who are in the midst of the battle, was inspiring. I hope it moved people to be proactive about breast cancer.”