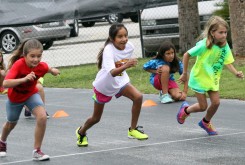 OKEECHOBEE — The Hershey district track and field meet was more than three hours old and past lunch time for its young participants, but four girls from Pemayetv Emahakv Charter School still had enough fuel left to capture one of the day’s most exciting races.

Sixth-graders Jenna Brown, Janessa Nunez, Aubrey Pearce and Julia Smith combined to win the 4×100 meter relay in the girls 11-to-12-year-old division May 16 at the Okeechobee High School football and track stadium. By winning the race, the foursome qualified for the Hershey state meet June 21 at Ansin Sports Complex in Miramar. Eight other PECS students also qualified with first- or second-place finishes in their events.

The district meet featured hundreds of students ages 9-14 from schools throughout the Okeechobee region.

The PECS girls entered the homestretch of the 4×100 in second place, but Smith overtook the leader in the final few meters with a stirring sprint in front of bleachers filled with cheering athletes.

“The girl was ahead of me, but I didn’t want to lose. So I went faster,” Smith said.

The PECS girls said their strategy was to use their fastest runners for the first and final legs. The game plan paid off. Nunez put the team in front with a strong leadoff run. Brown and Pearce handled the second and third legs, respectively, and kept the team in the lead or close to it before Smith closed with her impressive dash. The winning time was 1 minute, 5 seconds.

Another key was all four runners made clean handoffs with the baton. The crisp exchanges came despite having limited practice. Their only previous run as a relay team was in the school meet earlier in the month when they provided a glimpse of what was to come.

“We had to go against the boys, and we still beat them,” Nunez said.

The relay victory wasn’t the only triumph for Smith, who had an outstanding day by winning all four events she entered. Smith’s other wins came in the 100- and 400-meter runs and the softball throw. She won the 100 in just under 15 seconds and the 400 in 1:18. She hurled the softball 137 feet, 4 inches.

Justin Gopher flashed plenty of speed on the track as he won the 400-meter run and finished runner-up in the 100-meter run in the boys 11-to-12 division.

The two youngest state qualifiers from PECS came in the 9-to-10 girls division. Angelie Melton finished second in the 50- and 100-meter runs. Ysla Meras was runner-up in the softball throw.

Note: Some long jump results were not available as of press time.