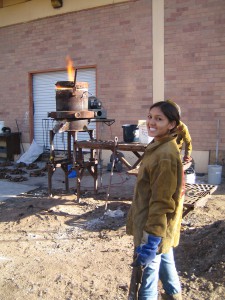 NAPLES — Jessica Osceola has always been creative, and she comes from a close-knit family who place their heritage and cultural traditions at the top of the list. A daughter of Douglas M. Osceola Jr. and his wife, Sandy, she was raised in a traditional atmosphere that adhered to camp life through her father’s generation.

Her grandmother, Tahama Osceola, and her great grandmother, Juanita Osceola, introduced her to the Seminole arts at an early age. She has always shown a keen interest in adopting the skills of her ancestors.

Following graduation from high school, Osceola enrolled in Florida Gulf Coast University. Originally a history major, she was drawn to the world of art as she attempted to express herself and the role of Native Americans in American society. In 2008, she received a bachelor’s degree from the College of Arts and Sciences.

“My Seminole ancestry and their way of life include the pride of a people who are known as ‘The Unconquered,’” Osceola said. “My Irish background from my mother helps me to blend into the melting pot of diversity, struggle and opportunity for which this country stands. I am constantly battling with these two identities and the stereotypes conferred upon my cultures by society. My art provides me with a media for self-expression.”

A year of study at the Institute of American Indian Arts in Santa Fe, N.M. further enhanced her artistic skills and broadened her scope of communication through her art work. Several of her sculptures were included in the Seminole Artists exhibit at the Ah-Tah-Thi-Ki Museum.

A rapid learner, Osceola easily passes on information to others, and she shows a great deal of promise and compassion when teaching children and adults. This skill motivated her acceptance of the role of traditional arts specialist at the Juanita Osceola Center where she served her community for more than a year.

Realizing that she had reached a plateau in her development, Osceola recently resigned her position to pursue her artistic career. She joined a diverse group of eight emerging artists from Fort Myers, Fla. called the San Carlos Collective. The members are connected by friendship, place and ambition. They have all received their technical training at Florida Gulf Coast University.

Although highly individual in style and medium, the members share a sense of experimentation and discovery, as well as a desire to react to the traditions of art, whether affirming or negating them. Through their combined efforts, they are receiving positive exposure for their creations, and they recently exhibited at the Taste of the Arts, Art Walk and Sidney & Berne Davis Art Center in downtown Fort Myers. 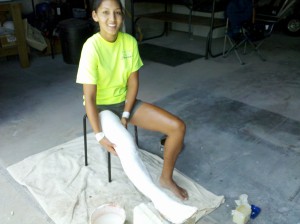 The San Carlos Collective was accepted for exhibition at the prestigious Art Now Fair at the Catalina Hotel in Miami Beach from Dec. 1-4. This unique, contemporary art fair is held annually and focuses on providing exposure for internationally renowned artists to private collectors, museum curators and art dealers.

The exhibit enjoyed a high volume of traffic, and each of the members found a buyer for some of their creations. Completing this very successful venture, the Collective has been invited to participate in the New York Art Now Fair in March 2012.

“Creating art, whether it is a sculpture or ceramics, is a constantly evolving process,” Osceola said. “In my own art, my biggest inspiration comes from the people I meet, the places I visit and the emotional experiences I draw from it. Through art I can tell the world how I feel and how I think and how I perceive.”

Osceola said she prefers working in clay and metal, but she likes experimenting with as many materials as possible. She’s worked with glass, resins, steel, plaster and more, and her current piece combines heavily glazed clay surfaces and cast metals. She likes to emphasize form, texture and medium.

“I am instinctively drawn to creating unattractive surface imperfections and forms that arouse vulnerability. My quiet, introverted personality is often contradictory of my outspoken work. As a result the work becomes a catalyst for communicating with an audience about visions of my past, present and future.”

Even though she enjoys a very productive period in her artistic creativity, Osceola is looking ahead. She is exploring the curriculum at several possible universities in consideration of pursuing her master’s degree in fine arts.