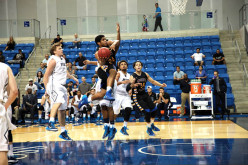 DAVIE — With less than a minute left in Embry-Riddle’s seventh consecutive win to start the season, DeForest Carter eyed the basket with the ball in his hands. After determining he had enough open real estate along the baseline, Carter drove to the hoop and slammed home the last of his 20 points on a night when dozens of his friends and family members watched at Nova Southeastern’s Don Taft University Center.

Dunking represents only a sliver of the vast repertoire that the 6-foot-1, 218-pound senior point guard from the Big Cypress Reservation brings every time he laces up his sneakers.

“I think it’s exciting for him to do that,” Embry-Riddle head coach Steve Ridder said, “but I’ll tell you he’d rather give somebody a great pass.”

Making smart, clean, crisp passes – which Carter did on his way to handing out a game-high seven assists in Embry-Riddle’s 79-63 win Nov. 25 against Nova – is something his teammates have benefited from for four years.

“He makes everything easy for me. You just have to catch and finish, basically,” said Cesar Pastrana, a 6-foot-8 senior center from Columbia, whose game-high 23 points included some via Carter’s passes.

As of Dec. 29, the all-around versatile Carter led undefeated Embry-Riddle in several categories, including assists, blocks and steals while averaging 10.8 points per game. Toss in valuable components not found on stat sheets – namely his senior leadership accompanied by an upbeat attitude – and it’s no surprise that his coach mentioned the name of an NBA Hall of Famer in the same breath as Carter.

“I think his ability to give other people shots is truly a Magic Johnson,” Ridder said, noting that Carter mirrors the three-time MVP’s personality and court awareness. “Magic always had a great feel for where his teammates were.”

Carter’s deft passing ability – which occasionally includes no-looks – comes from all points of the court, whether it’s starting fast breaks or finding someone down low from the top of the arc or dishing off at the last second while driving the lane.

Last season, Carter set an Embry-Riddle record for most assists in a season with 246, an accomplishment that helped earn him First Team All-Sun Conference and honorable mention All-American accolades for the second straight year.

This season, he neared Christmas on the cusp of becoming the program’s all-time leader in career assists, an accomplishment Carter said he will gladly share with his teammates.

“It would be a great record to have because it’s not just me; it’s my teammates as well. It takes two people to get an assist,” Carter said. “I’ll say the whole team got that record.”

Carter’s ascension into being a top-notch assist man in college has been a somewhat unexpected journey. The Montverde Academy graduate arrived in Daytona Beach in 2011 known more as a shooting guard and small forward.

“He could score and he could guard people and he was good enough for us to aggressively recruit him,” Ridder said.

What Ridder didn’t know then was that he landed someone who would eventually change roles and morph into a dynamic point guard with a seemingly natural knack for threading pinpoint passes and setting up teammates for scoring chances.

“We had no idea at the time how good of a passer he was; I think if people would have known that in high school, he wouldn’t be at Embry-Riddle,” Ridder said.

Proof that Carter could handle major college basketball came Nov. 3 when he produced game-high totals in assists and steals and a team-high 16 points in a preseason loss at Florida State.

“When we played Florida State several weeks ago, to be honest, I thought he was the best player on the floor,” Ridder said.

Carter’s roots as a point guard can be traced back to his youth basketball days in Big Cypress when he played with his older brothers Greg and Josie and friends.

“When I played on the rez, I was always the tallest guy and I saw over everybody, so I played point,” Carter said. “Growing up playing with my brothers, they were the scorers and the shooters. I’d be the one passing and passing. I’d have 15 assists at the end of the game, but I’d have two points. Everyone would say, ‘Nice job, Greg,’ or ‘Nice job, Josie.’”

Carter, who is also close to breaking the school record for all-time steals, didn’t seek praise as a kid nor does he seek it now, but kudos seems to follow him even on those rare occasions when his passes are not on target.

“They’ll say, ‘Great pass, DeForest.’ I’m like, ‘No, that was a great catch by my teammates,’” Carter said.

As co-captain and one of six seniors on the roster, Carter is part of an experienced group that hopes to make the program’s final season in NAIA a memorable trip. A 10-0 record and top 10 national ranking is a good start.

“The most important thing for (Carter) right now is his leadership ability. He’s bringing others with him, and that’s another reason we’re having a lot of success,” Ridder said.

“His demeanor is unbelievable on the court. His leadership is awesome,” Pastrana added.

Those traits make Ridder believe Carter could have a bright future as a coach after his playing days end.

“When you’ve been doing this stuff for this long, you love to win and you love championships, but what you do is you care about people and that’s why he would be a great coach,” said Ridder, who is in his 26th season at the helm of Embry-Riddle. “He’s just a natural. He’s got the personality, he cares and that’s why I hope he stays in coaching and helps young kids because that’s what he would do really well at.”

Carter began his night against Nova by draining 3-pointers on his first two shots. The dunk at the end of the game carried more significance for him than simply stuffing the ball through the twine. He said it allowed him to show how far he’s bounced back from an offseason injury.

“I have some athleticism,” Carter said. “It was nice that I could show it to my family and my friends there because I know they haven’t seen me get up like that before. It felt great to finish and have my teammates jump up. It made me feel like I was (Michael Jordan) out there.”