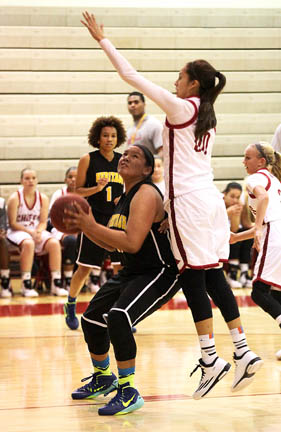 FORT LAUDERDALE — With one minute left in the second quarter, a sophomore from American Heritage attempted to score but was fouled by a freshman from Cardinal Gibbons.

The play was nothing out of the ordinary in the Dec. 2 high school varsity girls basketball game in Fort Lauderdale except that the two players – meeting for the first time as opponents on a court – share common threads. Heritage’s Skyla Osceola and Gibbons’ Dasani Cypress are cousins from the Hollywood Reservation.

“It was fun playing against her, seeing how she is doing on the team,” said Skyla, a point guard. “It was nice seeing her again. She’s got much better.”

“She knows how to work with her team and make stuff happen,” said Dasani, a forward/guard who is in her first year at Gibbons.

As the teams entered the second month of their seasons, coaches from both sides praised their Seminole players.

Sklya has been a valuable part of Heritage’s success since she arrived at the Plantation school as an eighth-grader fiercely dedicated to the sport.

Putting up double figures has become the norm for Skyla, who is among the team’s top scorers. She had 17 points in an early season victory. Against Gibbons, she drilled a 3-pointer from the top of the arc as time ran out in the first half that gave Heritage a 31-18 lead.

“She has been scoring consistently for us this year. She’s definitely stepped up in that department,” said Kossenko, whose staff of assistant coaches includes Skyla’s father, Marl Osceola.

Skyla is the youngest of Heritage’s three captains. She said the role is an honor.

“Sykla leads a lot in terms of being very vocal,” Kossenko said. “She is probably the most vocal on the team. It’s absolute leadership.”

Skyla brings experience from playing for Hollywood Christian’s varsity in grades six and seven, which included capturing a state title in 2011 and finishing runner-up the following season. Skyla said playing at Hollywood Christian with her older sister Ariah Osceola and other players from the Tribe, including Maleah Isaac and Darlah Cypress, helped her grow as a player.

“All my experience I learned from them because playing with older people you’ve got to learn more and they get you ready for the next level. That properly prepared me,” Skyla said.

When Gibbons cut into Heritage’s lead in the third quarter, Skyla regained momentum for her team with a block at one end followed by a 3-pointer at the other.

Skyla started and played nearly the entire game; Dasani came off the bench as a sixth player, although her coach Kevin Gordon said after the game that he plans to promote her to a starting spot. Dasani was held scoreless but had a steal and rebound during Gibbons’ brief rally in the third quarter.

Indeed, Dasani and Gibbons bounced back in a big way with consecutive wins against Pompano, Chaminade and Cypress Bay. Dasani scored five points each in two of the games and four in the other.

“She’s a good kid. I’m happy to have her,” said Gordon, who hosted a basketball camp last summer that Dasani attended while she was considering schools.

After playing for Ahfachkee, Dasani had to make a sizable adjustment attending a far larger school.

“It’s a big difference coming from a small school where everyone knows everybody,” she said.

Dasani admitted she was “really nervous” in her first game for Gibbons but has since settled down. She scored seven points, including a 3-pointer, in a one-point victory against Hallandale Nov. 24.