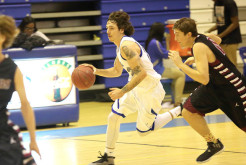 “He’s looking to make the extra pass, which isn’t a bad thing, but in close games we need him to get us over that hump,” said Belton, who is in his first season at the helm of the Flying L’s

With Fort Lauderdale locked up with Stoneman Douglas in a tight battle Dec. 8, Pierce heeded his coach’s suggestion in an eye-opening manner as he scored nine of his team’s final 11 points in a 49-43 win.

After making a steal at one end, Pierce drove the length of the court for a layup that put Fort Lauderdale up 40-37 with five minutes left in the game. A short jumper from Pierce made it 42-37.

With one minute left and Fort Lauderdale ahead by one point, Pierce again went coast-to-coast. This time the result was a 3-point play. Next, he forced a turnover that led to a trip to the foul line, where he made the first shot, missed the second but grabbed his own rebound to help run off more time.

Pierce made another foul shot in the waning seconds. His impressive stretch in the final five minutes came on a night when he scored 20 points and energized the home crowd with three dunks.

All in all, not a shabby outing for a player in just his eighth game with a new team.

“He’s doing a phenomenal job of fitting in,” Belton said. “A couple games ago, he would have made the extra pass. He has a clear understanding of being aggressive and not being a ball hog.”

Pierce, a senior, transferred to Fort Lauderdale this year after spending last season at American Heritage in Plantation.

Four days after the Stoneman Douglas game, Pierce drained a season-high 38 points in an 83-74 win against Monarch, an effort that didn’t even earn him high scorer in the Pierce family. His sister Shae Pierce, a sophomore on the Hollywood Christian girls team, scored 42 points in a game earlier in December.

Pierce has been used mostly as a point guard or shooting guard, but he’s also tackled another role. As one of only two seniors on a young team, Pierce has had to step up in the leadership department.

“Leadership is a big part. They’re all young guys. Stay positive and keep pushing them,” Pierce said. “It’s a lot on my shoulders. I’ve never been put in that situation, but I work hard every day. I’m fit for it.”

Belton said Pierce would also be a good fit at the Division I college level.

Pierce said he has received some offers from Division I colleges.

Even though this season is Pierce’s first and last at Fort Lauderdale, he’s already made a lasting impression.

“It’s been a pleasure and a blessing to coach a kid of his skill set,” Belton said. “He’s done nothing but be receptive to the coaching and the criticism that comes with it.”