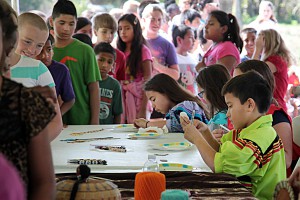 OKEECHOBEE — An event commemorating the 1837 Battle of Okeechobee during the Second Seminole War gave Pemayetv Emahakv Charter School students an opportunity to showcase their culture to peers. About 500 students from nine area schools witnessed a mini re-enactment of the skirmish Feb. 21 at Okeechobee Battlefield State Park and participated in traditional Seminole activities.

About 30 PECS students attended as spectators, but 13 were part of the day’s demonstrations. The culture students worked on crafts projects and cooked frybread as Glades and Okeechobee County students watched and learned.

That confidence was shared by the students who kept busy with beadwork, sweetgrass basket and wood carving demonstrations, while curious onlookers filed past them. Some asked the Charter School students questions; others simply stared in awe.

“I can’t imagine people watching me,” said Stacy Castro, 9, of Okeechobee. “They are pretty brave.”

The students were chosen from their culture classes because of their knowledge and proficiency of their crafts. Supervised by Culture events specialist Lewis Gopher, two eighth-grade boys wielded sharp carving knives with care as they created pieces out of cypress wood.

“It’s pretty cool to show kids what we do at our school,” said Rudy Juarez, 14, who has been carving since fifth grade. “It’s pretty neat for them to see us actually carving the things they see on display.”

Aubee Billie, 10, seemed unfazed by the hordes of young children as she concentrated on making a beaded medallion necklace.

“They asked us questions like, ‘Is it hard to make,’” said the fifth-grader. “I told them if you do it a lot, it isn’t.”

“It’s funny because they kept saying we are really good at it,” added fifth-grader Caylie Huff, 10.

Instead of selling their creations, the Charter School kids wanted to hold onto them.

“Everyone is asking if it’s for sale,” said fourth-grader Dakoya Nunez, 10, who worked on a beaded pen. “It makes me think ‘I made it, go make your own.’”

Sixth-grader Sage Motlow, 13, liked sharing her knowledge of basket making to interested spectators as she worked on her craft. Janessa Nunez, 11, also enjoyed demonstrating how to make a basket, which she said takes a couple weeks to complete.

The day included Indian dancers, alligator wrestling, musical performances and 19th century-style artifacts for sale, including old-fashioned candies. Tribal member Pedro Zepeda and two other men participated in the mini re-enactment on the Seminole side; four other men represented the American soldiers.

“Teaching culture in school is one way to get it to them,” said Janelle Robinson, PECS teacher aide. “If we teach them, then they can get it out there to others.”