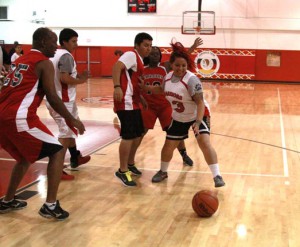 BIG CYPRESS — A friendly charity basketball game between Ahfachkee School staff and students turned out to be competitive, too.

Proof that the staff was ready for a serious game came on the opening tip, which was won by teacher and coach Kristin Stoots, who jumped higher than student Jazmine Billie at midcourt in the Herman L. Osceola Gymnasium March 21.

The staff captured hallway bragging rights with a 24-22 win.

“It was fun. I did think they were going to give us a break, but they didn’t,” said student player Dalton Koenes.

The final score wasn’t the only significant part of the game. The event was part of the Student Council’s March Madness Basketball Game and Food Drive, which raised food and money for the Compassion Avenue Food Bank at United Methodist Church of Clewiston.

“We had fun with (the game). The real work we already did for the food drive,” said teacher Jarrid Smith, who tied teammate Tim Pruitt for game-high scoring honors with eight points.

Seeing teachers in red basketball uniforms, complete with shorts and sneakers, prompted plenty of giggles from students in the younger grades as they entered the gym. But the staff had the last laugh. The students’ hopes to tie the game in the waning seconds ended with a steal by Pruitt that secured the victory.

The students had to play from behind throughout the game after the staff raced out to a 10-1 lead. With a few players taller than 6 feet – including teacher Antonio Wright – the staff used their size advantage on the boards. Wright had six points.

“But he can’t play for the Miami Heat,” said student player Leilani Gopher.

The students stayed close thanks in part to a 3-pointer from Jazmine Billie and a strong game on both sides of the court from Nathaniel Jim, who was the students’ leading scorer.

The game was accompanied by an enthusiastic cheerleading team from the younger grades and the school band, which included an appearance by principal Lucy Dafoe on trumpet.