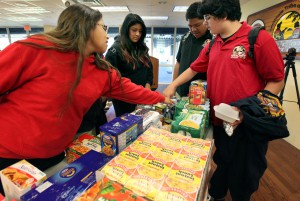 “Last year we went on a field trip to Clewiston and helped pass out free vegetables to people who did not deserve to be in that position. It felt good to give back to the community. I left there with a whole new idea of what it’s like to be needy,” Cypress said during a school assembly March 14 to meet Alice Whitt, head of Compassion Avenue Food Bank at First United Methodist Church of Clewiston.

This year, Cypress and other members of the Ahfachkee School Student Council led students in the first March Madness Basketball Game and Food Drive to benefit the food bank where Whitt said the need to feed Clewiston’s growing poor population is year-round.

“When we started the food bank we were serving 75 to 80 families twice a month … now we are serving 625 families,” Whitt told students. “The need is more than you can imagine … and summer is coming. People don’t give as much in the summer.”

But summer is when the need is the greatest.

Of the little city’s nearly 2,800 public school children, about 80 percent get free or reduced school lunches based on household income, Whitt said. Every child is allowed free breakfast. Typically, many community food pantries slip into crises during spring simply because people do not donate as much outside of the fall and winter gift-giving months that bracket Thanksgiving and Christmas. That means food banks could be essentially empty in the summer, leaving children with empty stomachs during summer vacation.

Most of the food goes to children in families headed by single mothers or fathers.

“Parents in need don’t want to be in that position. Please help us help them,” Whitt said.

On March 21, when Ahfachkee students battled the staff in basketball at the Herman L. Osceola Gymnasium, spectators paid $5 or three non-perishable food items, including canned goods, for admission. About $150 and 500 pounds of food were collected throughout the month-long effort.

Tradition Preservation curriculum specialist Mary Jene Koenes provided students during the assembly with insight about why they should care about people outside the reservation – even as they never forget the atrocities suffered by ancestors at the hands of invaders.

Stories heard and witnessed by Koenes as she grew up during transitional times testified to the Seminole spirit of respect for the earth and all living creatures. She remembers when the Tribe was so poor that when she started fifth grade in Clewiston she could not attend classes because she had no shoes. Those were the days when no one owned cars but when someone became ill the women walked for hours – even in the middle of the night – to give their last bit of food to the sick.

“My grandmother used to say, ‘Love thy neighbor and forgive them,’” Koenes said. “I know we were not treated right, not from the very beginning, but we need to forgive so we can honor those who made the sacrifices and move on.”

A cafeteria table at the assembly brimmed with canned vegetables, macaroni, rice and microwavable soup. Students attentively listened to Koenes and considered past hardships and present good fortune.

“Helping other people shows that even though we are a small community, we are strong,” said ninth-grade Student Council representative Nashoba Gonzalez.

Classroom teacher Jarrid Smith, the Student Council’s faculty adviser, said he and his family helped out the food pantry’s needs three Thanksgivings ago when they gathered a truckload of goods and then donated it to the church. Last year, he took Cypress and a small group of students to assist during a fresh produce distribution day.

Koenes said church members from surrounding communities were generous with the people of Big Cypress Reservation before the Tribe became prosperous. She remembers when money was so scarce among Tribal families that when parents shopped for flour, the girls would pick flour sacks that could become their next new dress.

“So when people from Clewiston and Labelle used to bring us trucks filled with clothes it was a big deal. We would choose things first that we don’t even think about today – like underwear,” Koenes said.