BIG CYPRESS — The hours after school are a prime time for Ahfachkee students to explore the world of creativity and knowledge through fun activities that have nothing to do with every day classroom work.

“After-school clubs have been proven to help kids be more connected to and engaged with their schools, which parlays into academic progress,” said Valerie Whiteside, Ahfachkee teacher coordinator. “Another benefit is that kids who are living in a more remote area, such as Ahfachkee, usually don’t have access to all the things students might have in a city. Having the clubs here gives them access to things like 3-D design and printing that are more readily available in a city school.

A 2008 study by the Harvard Family Research Project showed students who participate in quality after-school programs show significant gains in academic achievement, as well as positive benefits in social and emotional development, prevention of risky behaviors and improved health and wellness.

About 50 students are enrolled in the clubs and 40 attend on any given day; some attend only on the day their club is held while others are signed up for a few different clubs. About 30 students show up every day.

“We see a lot of progress in elementary kids, the older ones are usually engaged in sports programs,” Whiteside said. “The robotics club was mostly comprised of older students but after the last competition, most of them left. The younger kids are taking over the club and they love it.”

On a Tuesday afternoon in April, students filled the clubs with energy, excitement and creativity. In the art club, teacher Lynette White gave the students paper, markers, crayons and watercolors so they could recreate a drawing of some daffodils in a vase. She taught them how to create shadowing and shading to enhance their artwork. It wasn’t an easy task for the students and White didn’t want them to become frustrated.

“Not everyone’s will look the same,” she said. “And that’s the good thing about art.”

The students buckled down and interpreted the picture in their own way while giving a personal stamp to their images.

In the makerspace club, media specialist Michele Horrell read students a book and showed a video about the Wright Brothers. They then built small airplanes and had to figure out how to get them to fly, much in the way the Wright Brothers did – by trial and error.

Makerspace is a program in which students learn to ask, imagine, plan, create, improve and communicate while creating projects. The process improves critical thinking skills, communication, collaboration and creativity.

“They tinker and they build,” Horrell said. “They learn to follow directions and focus on the design process. And they have fun doing it.”

The airplane kits included already cut out paper for the wing and tail sections, straws and a few small weights to fit into the straws. Once the students finished decorating the wings and tails of their airplanes with colored markers, they had to figure out how to put it together and use the parts to make it fly efficiently. The challenge was placing the wings and tail on the fuselage correctly and using the right amount of weight to ensure a long flight through the library.

After a few tries, first-grader Kalina Cavazos realized how to use the weights to improve her plane’s flight time.

“It’s a lot of fun,” said Kalina, 7, who comes to makerspace club twice a week.

Over in the 3-D design club, kids sat behind computer monitors and designed creatures they would print in the 3-D printer.

“I designed an astrobot that has glasses,” said bespectacled Gene Jimmie, 9. “He has rockets on his back and he’s waving. I like it, it looks cool.”

Instructional technology teacher Robert Figueroa makes sure the items students create are small enough to print quickly, which for the 3-D printer can take 15 minutes to an hour.

“I want them to use their imaginations,” Figueroa said. “They can build anything using 3-D printing; it brings out all of their ideas.” 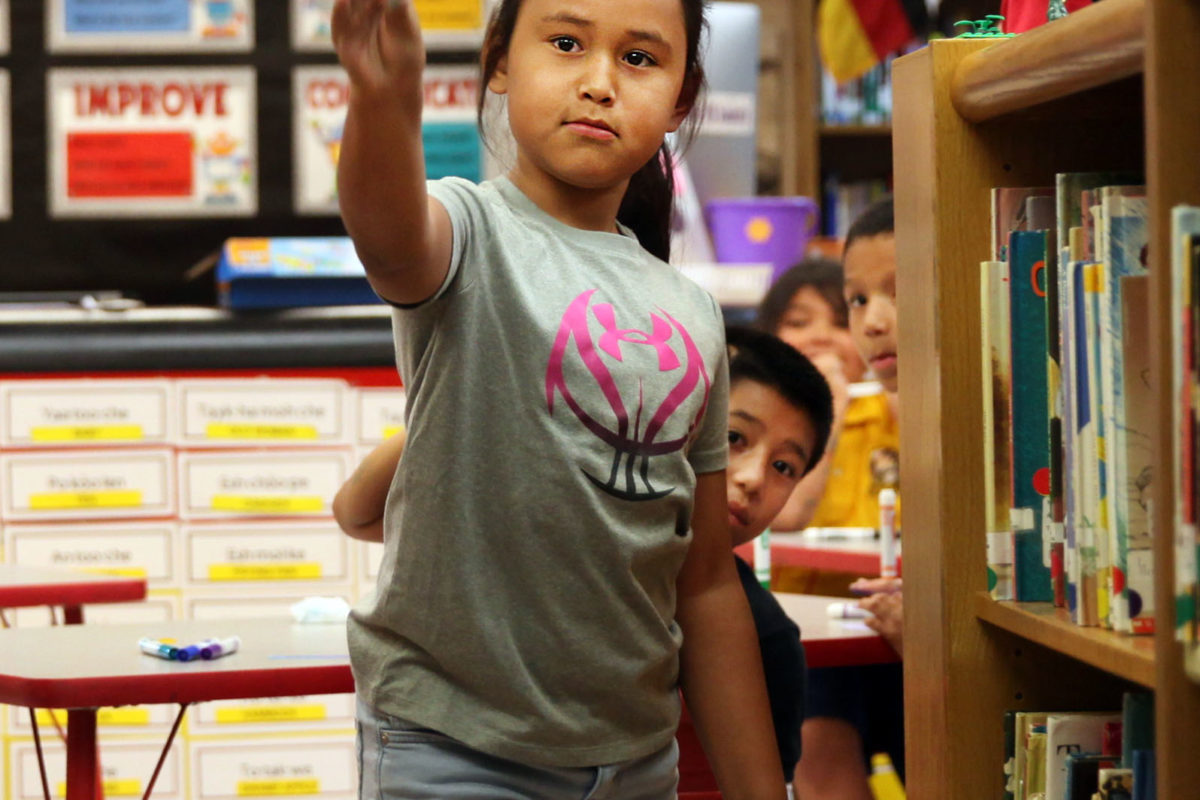 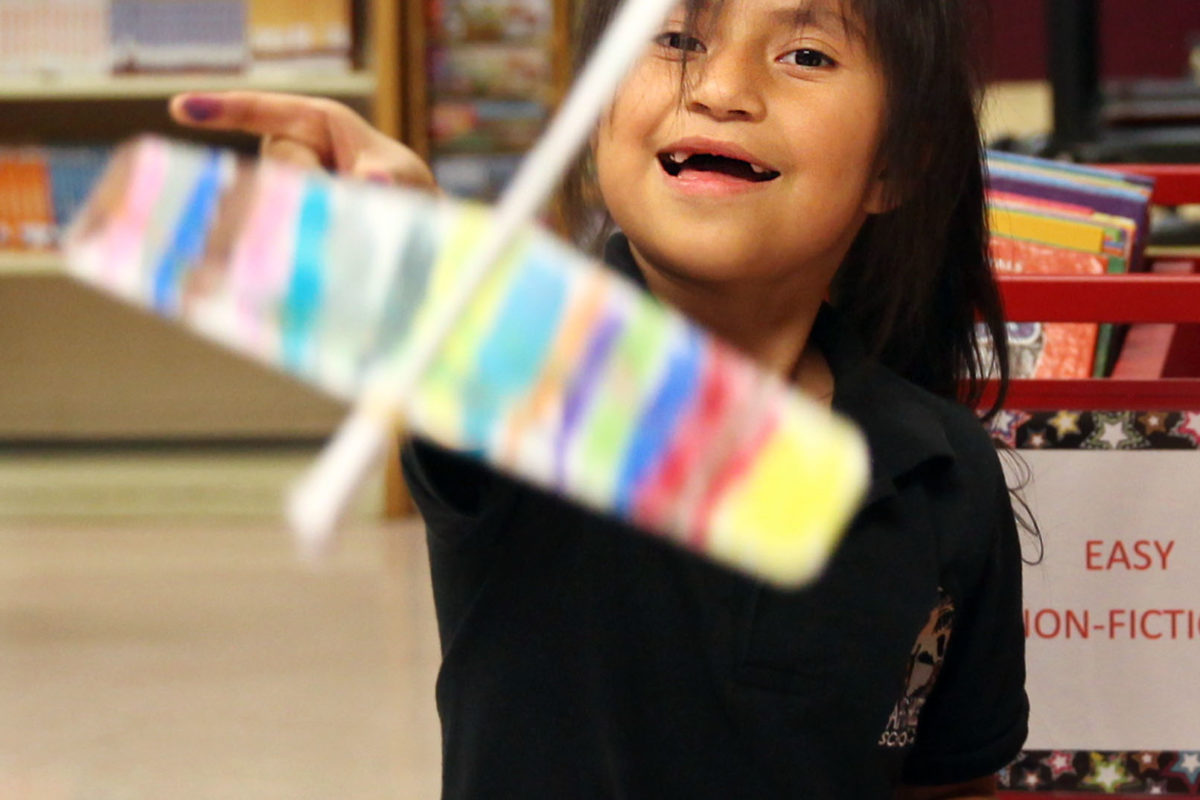 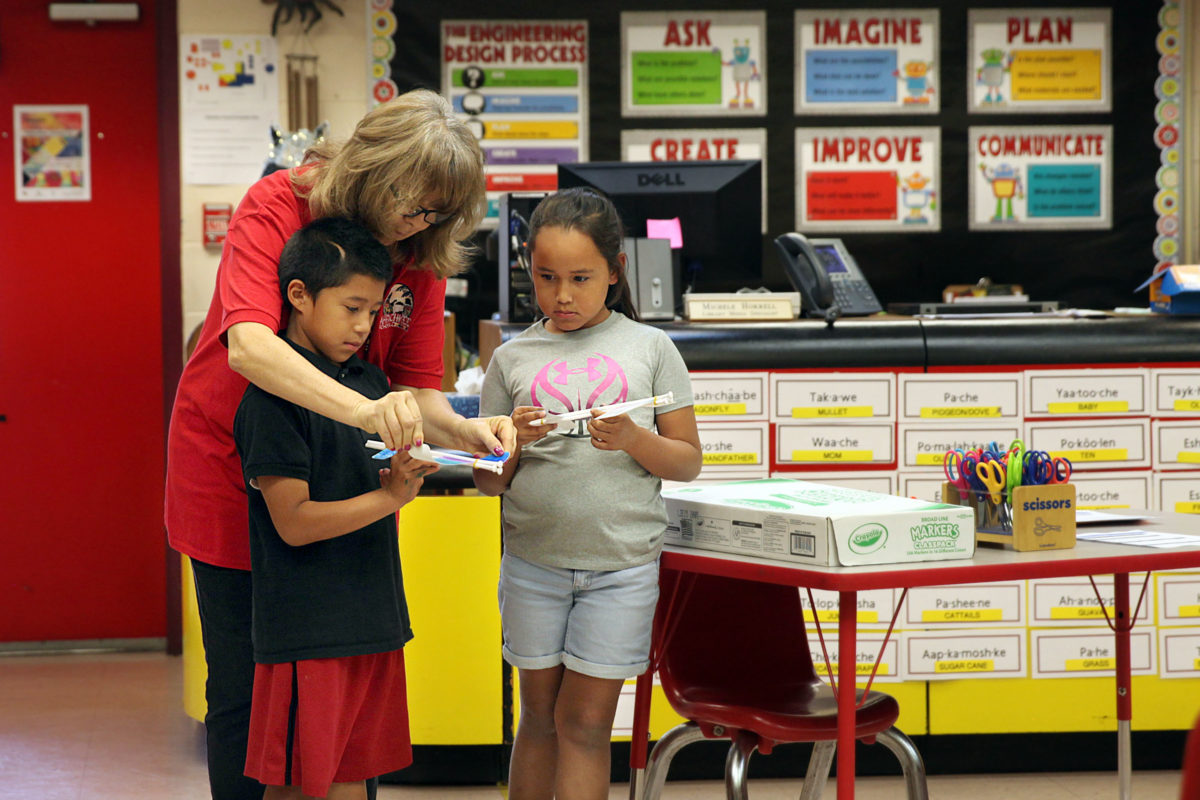 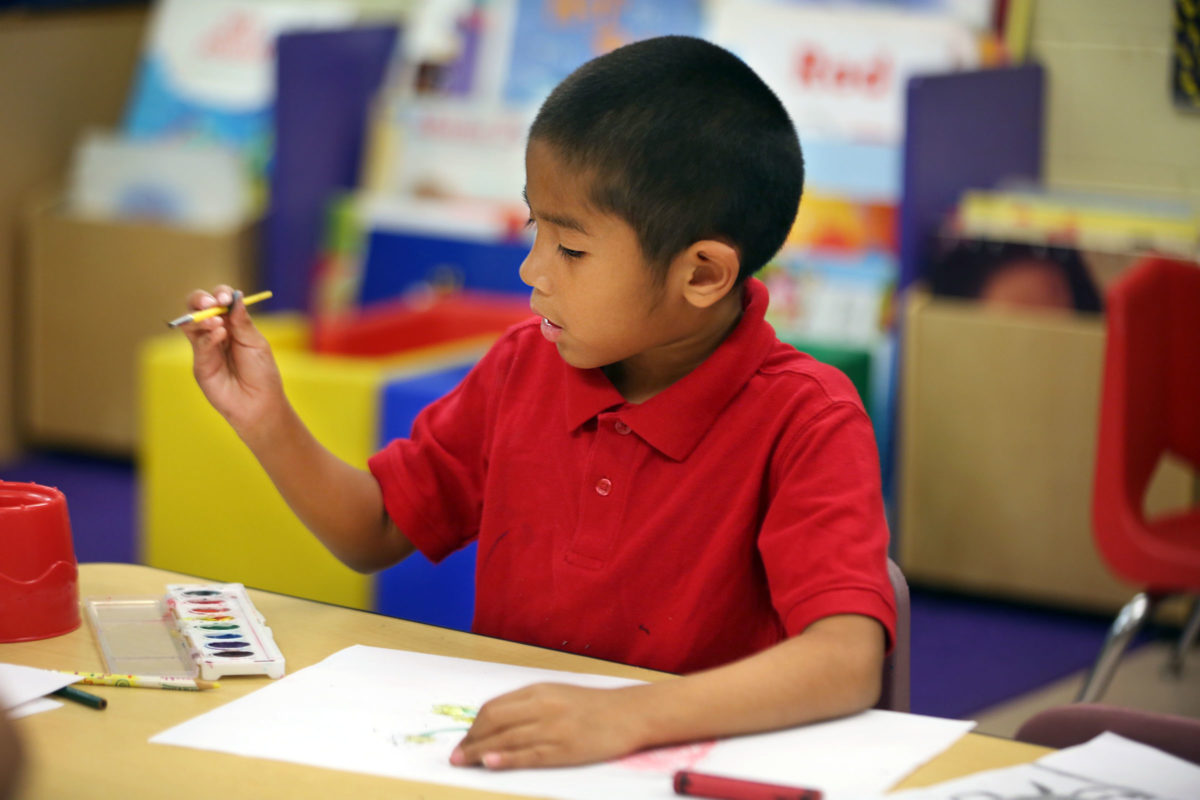 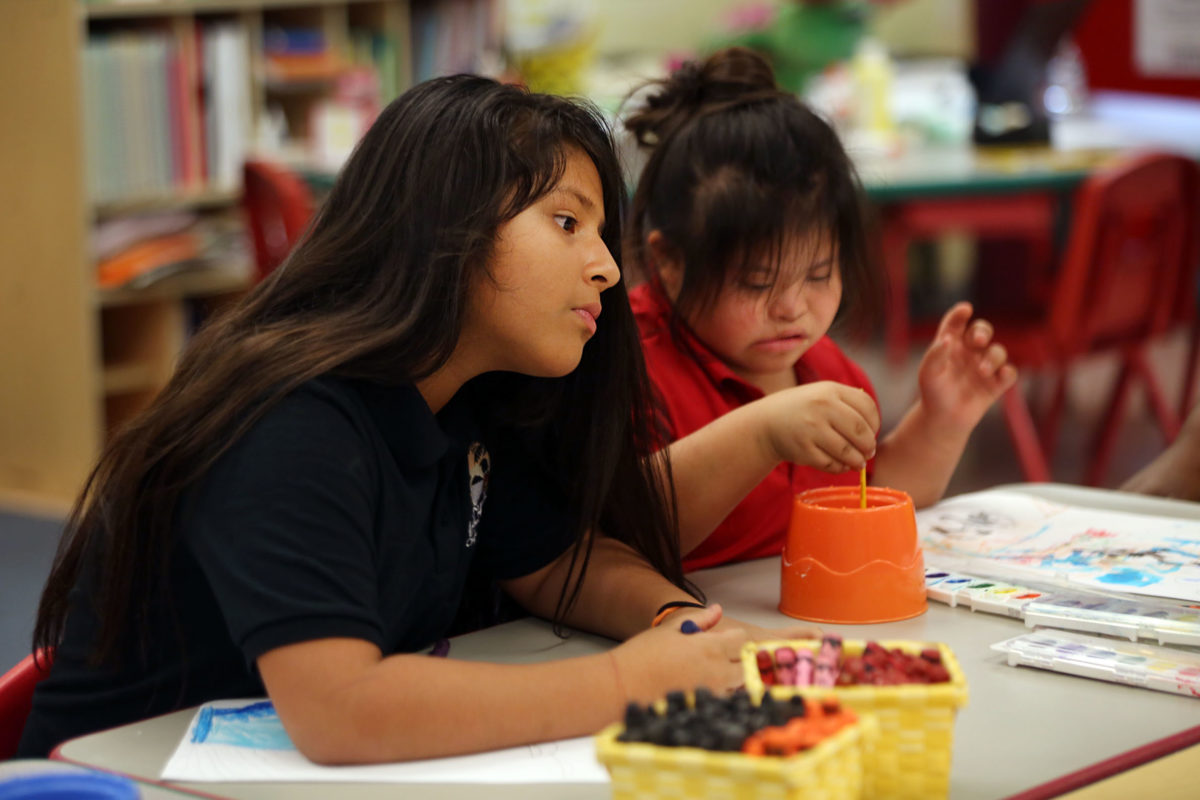 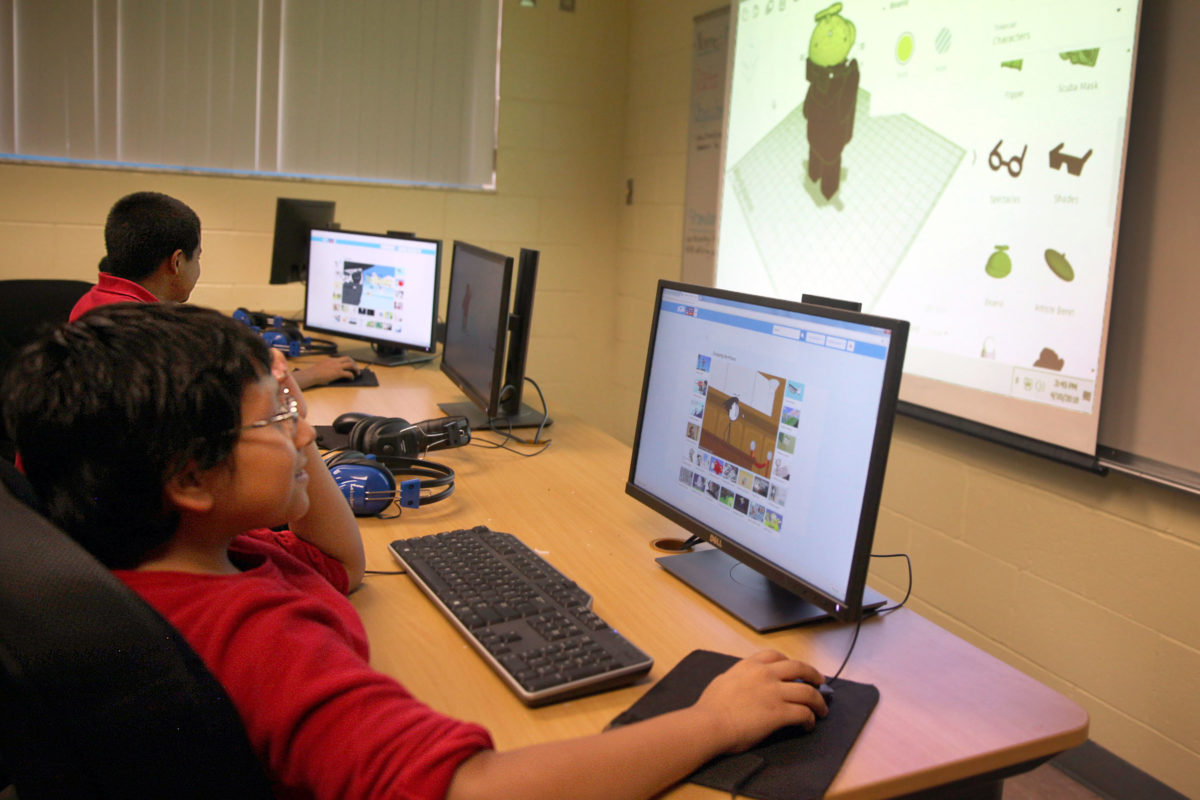