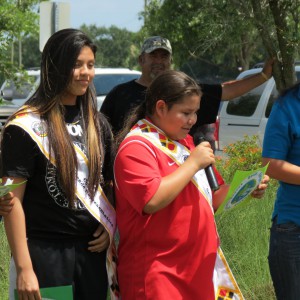 BRIGHTON — April 22, 1970 marked the first time the U.S. took a public initiative to generate awareness about Earth and the environment. To commemorate the 43rd year of Earth Day, Pemayetv Emahakv Charter School’s Student Council planted a tree on the school grounds.

“I thought it would be neat to have a tree that will forever recognize the 2012-2013 Student Council and 2013 Earth Day,” said seventh-grade Student Council Representative Rudy Juarez, who initiated the idea.

Students selected a honey tangerine tree to plant, and they erected a commemorative plaque during a dedication ceremony. The entire school attended the event and learned about Earth Day as each Student Council member presented a few facts about its origin.

The idea came to Earth Day founder Gaylord Nelson, then a U.S. Senator from Wisconsin, after witnessing the ravages of the 1969 massive oil spill in Santa Barbara, Calif., according to the Earth Day Network website. He utilized an emerging public consciousness about air and water pollution to get environmental protection onto the national political agenda.

“My goal is for the students to learn the importance of recycling, the history of Earth Day and that Earth Day should be practiced every day,” said Culture teacher Jade Braswell Osceola, who sponsors Student Council and led the Earth Day event.

Students will tend to the tree during their Culture classes.

“This tree will remind people how important our planet is,” fifth-grade Representative Kamani Smith said. “We need to save it and stop littering.”