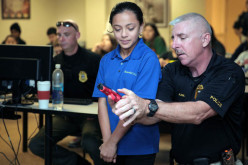 Before the Explorers stepped up to use the MILO Range interactive video training system, they reviewed important gun safety rules. Seminole Police Department Officer Kyle Boyd asked the group what they should do if they find a gun.

“Stop, don’t touch, leave the area and find an adult,” the students answered together.

SPD Officer John Barber reviewed other key safety measures: Always treat guns as if they are loaded, never put a finger on the trigger, point guns toward the ground instead of at a person and never play with guns.

“Who here plays a sport?” SPD Officer David Lee asked. “In football, you keep practicing the same plays over and over so you don’t even have to think about it, you just know what to do. In law enforcement, we practice all the time. We want our officers to have the same level of awareness and be prepared; it should be instinctive.”

MILO provides interactive simulation training for all branches of law enforcement, military, security and public safety agencies throughout the world, according to the company’s website. SPD trains officers with the system, and Hard Rock uses the technology to train security guards.

“It allows us to train safely,” Barber said. “Officers practice marksmanship, drawing from their holster and shooting only the right targets. On the street, we have to make sure we only shoot the bad guys.”

During one scenario on the screen, students helped Officer Lee identify in an instant whether someone was a good guy or a bad guy when they randomly appeared behind doors or windows. The exercise simulated a video game in which the player goes down long, empty hallways and around blind corners, but the officer could not shoot at everything that moved. The kids were right on target; no good guys were shot during the scenario.

At the meeting, Explorers were eager to take their turns shooting targets on the video screen.

Because the training guns are the same size and weight of a real gun, officers made sure the Explorers handled them properly. Two kids went up against each other in games that tracked hits and misses. The competitive exercise produced a proud winner every round.