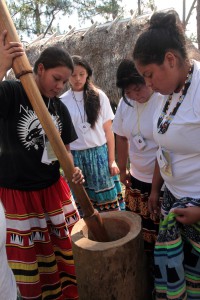 BRIGHTON — Preserving Seminole culture is at the heart of every Tribal event, especially the annual Pemayetv Emahakv Charter School’s Culture Camp in Brighton. From May 1-3, 240 students got hands-on experience in everything from making frybread to throwing tomahawks to butchering hogs. During each activity, the Creek language was taught one word at a time.

“Our main concern is the language,” said Lorene Gopher, director of the Brighton Culture program. “If we don’t write it down and save it now, then when we’re gone, it will be gone. There is no other way to preserve it than to write it. It used to be handed down through the generations, but I think we missed a generation along the way. The younger people don’t know it, so we have to go back and teach it.”

Teachers supervising every activity had each student speak the action they performed. As fourth-grade girls put Indian dogs into pots of hot oil, teacher Jade Braswell Osceola reminded them to say “akpiket,” or “put in.”

PECS Culture Camp began when the school opened five years ago and serves as a highlight of the school year. Gopher makes sure to add new events to the schedule every year. Activities vary with the age of the children; kindergarteners through third-graders didn’t get near sharp knives or hot oil, but they learned the basics of carving and cooking.

Fourth- through sixth-graders carved tomahawks with sharp knives, cooked over the open fire, scaled, gutted and cut fish for frying and threw skillets and hatchets.

Jennie Billie told the Seminole legends to students in Creek, while her sister Juanita Osceola translated into English. One told the story of a hunter who learned a hard lesson. The legends were fascinating tales, but most importantly, they imparted morals.

“The most important thing is to listen and to keep your culture alive,” Billie said to students. “If you listen, you’ll make better grades in school.”

She told students their parents should speak Creek at home so they can learn it, but sewing, cooking, carving and everything else they did during Culture Camp were important aspects of being Seminole.

“It takes us back in time to experience how our ancestors lived,” Aiyana Tommie, 13, said. “It shows us all the hard work they went through.”

“And it keeps our traditions going,” added Courtney Gore, 15.

Students tackled each task with gusto. As they scaled and gutted fish, the kids sent scales flying and disposed of entrails  quickly. A group of girls made quick work of enough cans of spam to feed a small army, with tomatoes and rice of course.

Another group of girls roasted corn for sofkee, under the guidance of Martha Jones who helped them through each step in the process. The corn is roasted over an open fire in a pot with sand, which prevents the corn from burning or sticking to the bottom. Once roasted, the corn is sifted to remove the sand, placed in a large wooden mortar and crushed with an equally large pestle. It is then ground through a hand-cranked grinder where it is made into a fine powder. Add it to water with baking powder, cook for an hour and enjoy a fresh batch of sofkee.

The day wasn’t only filled with work; traditional games were played, too. Seventh- and eighth-grade boys played a game of corn hole, but the scores didn’t count unless they said them aloud in Creek. One point if the beanbag landed on the board; two points if it went through the hole.

The biggest responsibility of the last day fell on the shoulders of the eighth-grade boys, who slaughtered two young hogs and prepared them for butchering. Drayton Billie, 15, did the deed quickly with a long knife to the heart. Afterward, the boys got busy at two work stations. On one table, they scalded the hog with boiling water to remove the hair; this hog would be cooked with the skin on. At the other table, the boys skinned the second hog.

“By doing this with them, it gives them hands-on experience,” Norman “Skeeter” Bowers said. “By living out here, one day they are going to butcher one, so this gives them a head start on how to do it. It used to just be our way of life to kill a hog in the backyard. Today we are spoiled; we can just go to McDonald’s.”

The adults made sure youth got the full experience and understood each step of the process.

“You never know, the world could go to shot one day,” said Davey Snow, who taught the boys how to skin the hog. “Now, if you kill an animal, you’ll know how to take care of your family.”

The boys felt privileged to take part in the adult tasks during Culture Camp.