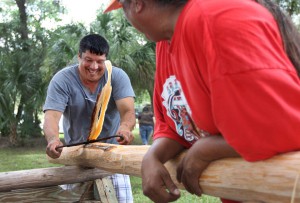 “He was always like the big brother who cared enough to tell us to stop and take a rest – a take your shoes off, have a glass of water and relax guy,” longtime friend Herbie Jim said.  “When I think of him, I see his open arms.”

Nearly 50 of Smith’s family and friends gathered at his sister Oneva Smith’s home on the Big Cypress Reservation to remember the outgoing father, brother and carpenter whose life was cut short at age 44 of accidental overdose in March 2010.

A poster filled with photos showed Smith surrounded by loved ones. “Forever in our Hearts” it read.

One by one, people shared their best memories of Smith. Nearly everyone credited him for his decades of building sturdy porches, barns, sheds or chickees – some have endured four hurricanes so far.

“Every time I go outside my house I see Mike because of my shed and porch,” Moses Jumper Jr. said.

“He looks over the whole reservation now,” said Big Cypress Board Rep. Joe Frank, who listed his workshop and shed as “built by Mike.”

Oneva Smith said her brother sometimes built things without being asked. One day, he built a bridge over a dip in the land at Mable Jim’s home so his neighbor did not have to trudge down the hill, over water and rocks, and then up the hill to the other side.

“It is hard to see all of his work wherever I look, but it will get easier,” Oneva Smith said. “Sometimes, now when I see his chickees, they make me smile.  That helps.”

Martha Tommie, of Brighton, remembered Smith for his deep religious beliefs. He led sunrise services at the addiction treatment facility they both attended years ago.  Tommie also recalled a chickee at the refuge that Smith built, which still bears his name.

Smith continued serving when he came home to Big Cypress. He erected the sign at the reservation’s Sober House recovery center and kept the grass mowed. His greatest success, all agreed, is his daughter Julia.

Julia, now 10, recited a poem at the memorial that ended: “It broke my heart to lose you, but you didn’t go alone. For part of me went with you, the day God took you home.”

“It was a tragic turn,” Jim said. “We all struggle with our inner selves.”

Smith will be remembered both for his sudden death and his zest for life. To honor the first, loved ones stand up against addiction to alcohol, drugs and gambling. To cherish the latter, they share happy memories.

“Mike was a man of many talents. We are all here for him and to never forget him,” said former President Richard Bowers Jr.

A buffet barbecue lunch was followed by cake, a horseshoe tournament and log peeling contests. Soulful country and gospel music by the Cowbone Band led by Pastor Paul Buster filled the grounds that surround the Smith home.

In the end, the second annual Mike Allen Smith Memorial was a celebration of life.

“He will be remembered for all the good things,” someone whispered.