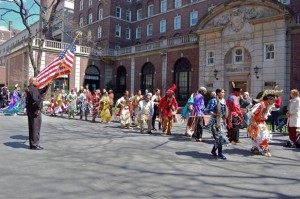 NEW YORK CITY — Archaeological evidence shows Native Americans have lived in New York City for 6,000 years; the Algonquin Tribe lived on the banks of the harbor when Europeans first landed in Manhattan in 1609. Columbia University held its Taking Back Manhattan Pow-Wow on April 14 to celebrate the history of Native Americans in New York.

Seminole Tribal member and Columbia freshman Braudie Blais-Billie is a member of the university’s Native American Council, which organized the third annual pow-wow.

Hundreds of people, including students and members of the New York Native American community, attended the event that featured dancers in traditional clothing, musicians and singers. The drum group Mystic River, of Connecticut, and the Silvercloud Singers, of Manhattan, were among the entertainment.

“It was a good turnout,” said Blais-Billie, of Hollywood. “People from off campus watched and danced. I have friends who have never seen a pow-wow and didn’t know there were Native Americans at Columbia. That was really the point: to say we are here.”

The pow-wow is called Taking Back Manhattan as a nod to the Lenape people, who were among the original residents of the metropolitan New York area. The word Manhattan means “island of many hills” in the Lenape language.

Blais-Billie actively participates in the Native American Council, meeting weekly with members to discuss issues, projects and events. The Council will now turn its attention to Native American Heritage Month in October and discuss whether to organize a petition to display a plaque on campus commemorating the Lenape people; other prominent New Yorkers – including John Jay and Alexander Hamilton – are acknowledged this way on campus.

“The pow-wow made me really happy,” Blais-Billie said. “I was proud of our Native American Council and the community we reached out to in Manhattan. It was fun, like being back at home.”