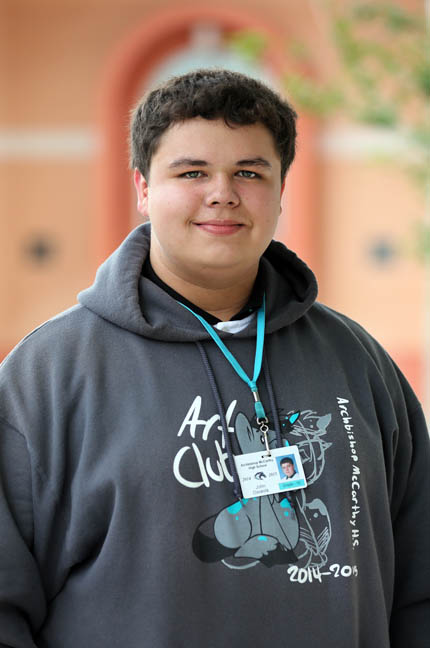 The Archbishop Edward A. McCarthy High School sophomore was recently invited to attend the Congress of Future Science and Technology Leaders from June 28-30 in Boston, Massachusetts where he will receive an award of excellence.

“The event is an inspiration. It’s a big motivation to keep working harder in school,” John said.

John, 16, is a member of the National Honor Society. A 4.15 grade point average is proof of his hard work in the classroom. Every night he spends about five hours completing homework.

Managing his time poses a challenge, so John uses a white board to stay organized. He sorts his assignments by the amount of time it will take to complete them. He said math and science are much easier than history.

Natural sciences and physics intrigue John, but Chemistry 1 and Algebra 2 are his favorite subjects. Recently, he was honored for having the highest overall average of any Chemistry 1 student at McCarthy.

“Chemistry is my best class,” he said. “I love anything involving math and knowing how the world works.”

John has always been inspired by Albert Einstein because he viewed the world differently than most people, knew things weren’t always as they appeared and learned to think outside the box. He also admires physicist Stephen Hawking, astrophysicist Neil deGrasse Tyson and former astronaut Buzz Aldrin.

John said he is eager to meet the world-class intellects at the Congress, which will be attended by his parents, Gem Osceola and Linda Jones. The program includes presentations by renowned scientists, two Nobel laureates, recipients of the National Medal of Science and the National Medal of Technology and Innovation, the dean of Harvard School of Engineering and Applied Sciences, and young science prodigies.

After high school, John plans to attend college and pursue a field he enjoys. Schools that he is considering include the University of Miami, Florida International University and Massachusetts Institute of Technology.

“Doing well in school benefits you for the rest of your life,” John said. “It helps you deal with basic problems you may encounter, learn how to socialize with people and express yourself the way you please.”